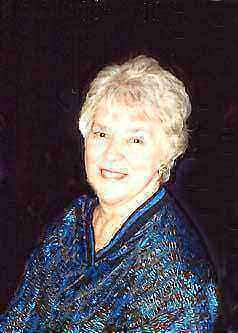 She was born in Wheeling on October 4, 1929, a daughter to the late William and Blanche Heller Baum. She was a member of St. Alphonsus Catholic Church in Wheeling, the Women’s Guild at St. Alphonsus, and the former Blessed Trinity Women’s Club.

In addition to her parents, she was preceded in death by two brothers, William J. Baum and Robert L. Baum, and one sister, Freda Lewicki.

Friends will be received Thursday, August 9, 2012 from 2-8 pm at the Altmeyer Funeral Home, 1400 Eoff Street, Wheeling. Mass of Christian burial will be celebrated Friday, August 10, 2012 at 11 a.m. at St. Alphonsus Catholic Church, Wheeling with Rev. Francis O’Kruta as celebrant.

The family would like to extend a special thank you to Valley Hospice and their staff.

John and I are so sorry for your loss. North Wabash St. has lost a kind lady and neighbor…she will be missed. Our sympathy to all of you.

I’m so sorry for your loss I will keep you and your family in my prayers.

I’m very sorry for your family’s loss. Margaret worked with my mom for many years and I remember what a wonderful, warm person Margaret was. My prayers are with your family in this difficult time.

Kim, i am so saddened for your loss.I know the Lord is watching over you and your family.May you find solace and peace in His words and that you are doing as well as you can. I miss you being at CSC,and I will never, ever forget you.

Kris, Im so sorry to hear about your Mother. You and your family will be in my prayers.Your mother will be dearly missed.

Mr Donahie, Kevin, Kelly, Kim and Kris my family expresses our deepest condolences. God bless your mother, may she rest in peace. My mother expresses her condolences as well.

So sorry to read of Mrs. Donahie’s passing in the paper…she was a great lady and I loved her. I have fond memories of her being just about the best mom Krev! I’ll be thinking of you all in the days to come; may the special memories you have be with you always.

My deepest sympathy to the entire family. Thoughts and prayers are with you all at this difficult time.

My sympathy to the Donahie family. My thoughts and prayers are with you during this difficult time. God’s peace and blessings to you all.

My thoughts and prayers are you with you all.

Our deepest sympathy goes out to the entire Donahie family. May you all give each other strength in this difficult time. Out hearts go out to you all. Rosanne and Shannon McNickle and John Basil and family

Our deepest sympathy to your entire family. Margaret was a very special person and was always kind and caring. We are saddened by your loss. During this difficult time, your loving memories will help lift you up.

Terry and family Margaret was a good wife and mother and we will all miss her my prayers will be with all of you. May God Bless all of you.