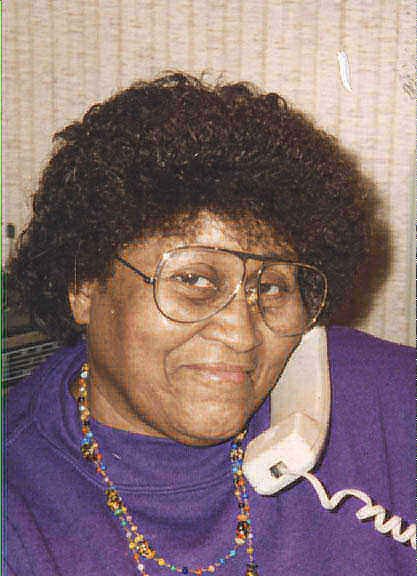 WILLIAMS, Mae Frances, 79, of Wheeling, died Sunday, August 2, 2009, in Lakin Nursing Home, Lakin, West Virginia. She was born February 16, 1930, in Wheeling, to the late Shirley and Gladys Galloway.
In addition to her parents, she was preceded in death by her husband, one daughter, and three sisters.
Mae was a graduate of Blessed Martin High School, attended college of commerce, 2 years of college at West Virginia Northern, and was retired from the Roman Catholic Diocese of Wheeling-Charleston after 26 years. She was a member of the Wayman A.M.E. Church in Wheeling.
She was also a member of the C.O.P. Citizens on Patrol to help clean up East Wheeling.
Surviving are her two daughters Desiree Williams and Darlene Williams; three sons Donald Frank Williams Jr., Daryl Williams, and Jesse Williams; one sister, Betty Lou Galloway; one brother, Shirley Galloway Sr.; a host of grandchildren and great grandchildren; several nieces and nephews; special friends Ms. Florence Bell, and Mr. and Mrs. Don Leslie Morris, and many other friends.
Friends will be received 2-4 and 6-8 pm Wednesday, August 5, 2009, at the Altmeyer Funeral Home, 1400 Eoff St., Wheeling, WV 26003. Funeral services will be held 11:00 am Thursday, August 6, 2009 at the Wayman A.M.E. Church in Wheeling with Rev. John E. Stephens celebrating.
Online condolences may be offered to the family at altmeyer.com

Aunt Mae Frances you will be missed. Now you and Grandma Rose can be together and watch over the family. Love the Prayears and Cains

I worked with Mae for many years at the Diocese. My prayers for all. Mae ALWAYS had a smile on her face and in her voice. May she rest in peace and may all of you find comfort.

I’m very sorry for your loss. I worked with Mae at the Diocese’s. She was a very special loving lady. Always had a smile on her face. I will keep your family in my prayers.

I am sincerely sorry for the loss of your Mother. I pray that the Holy Comforter will hold you and continue to hold you.

Peace be upon you!!!

I am very sorry for mrs williams death she was a very sweet and nice lady she was a wonderful person she a sweetheart every time i seen i talk her to her and hi to her and see how she was doing she was a friend of mine i going to miss her my heart go out to all of you.

sweetest and nicest lady you can ever know if you seen her down town you would stop and say hi two her I seen her one day down town.I said hi her and ask me I was I had to tell her who I was

she the sweetest and nicest lady you can ever know if you seen her down town you would stop and say hi two her I seen her one day down town.I said hi to her and she ask me whoI was and I had to tell her who I was I’ll remember you always

Dear Williams Family…..Sorry to hear about the lose of your Mother..May God Be With You and Your Family in this time of need….Are prayers and thoughts are with you and your family…..Robbie&Michelle&ShaquilleBrown

Dear, Grams I will always remember our times together and everything that we did. You were my rock when I was younger and I don’t think I would be where I am right now, if you hadn’t of played your role in my life.. You’ll always be with me, Grams! I love you, miss you, and wish you were still here… Love always, your grandson.. Daryl

hello mom,i love you soooooooo much and will miss you soooooo much.i know you are in heaven now with the lord,no more stress and no more pain.you was always there for me thru the good and the bad times, i could always count on you to be there for me. i will be lost without you but i’m happy you made it to heaven and earned those wings that the lord had waiting for you!im going to miss my best friend and mom,i love you mother!!!!!!

Hey, Mae, what’s up? How’s the afterlife? I’m speaking for everybody, when I say, “Mae, was a very kind woman, she always tried to help when she could and it didn’t matter who the person was, she had a big heart and she knew what to do with it, and we’ll greatly miss you. There’s so much that I could say bout her, but that would take a lifetime and nobody has that amount of time. So, I’ll just say the important things, you were a mom, a grandmother, a supporter, a friend, and now you’re an angel. Rest in peace Mae! We’ll miss you! We’ll always love you!

I remember as a young kid and you as my grandmother always telling me stories you always shared your mind with me even if you had trouble hearing that nevered stopped you, you use to rat your kids out to me and laugh about it I always thought that was funny, you showed me pictures and memories you appreciated what you had to give. I remember you always laughing you even laughed at the nursery home 2 months before you had died, I dont think you really knew who I was but you knew that I was your grandaughter you sat right across the bench from me evertime I looked at you, you would laugh and smile. I didnt care how old you were or how you looked you were the same old grandma I knew but with health issues. I know I wasnt ever grown up by your side but you were a great woman and still are. Your free now with god and you dont have to go through aches or pains anymore or having to lose the thought who you are and others. You dont have to go through that anymore your in a better place. I love you grandma

iam writting this for my brother donald who can not be at wake or funeral, i have some feelings he would say about our mother. i was the first born son, i was there when you really needed me. when you had to take care the rest of the family. i went to the service to help you out, i knowyou stuggled hard to take care of us. iwas there each day and night. i had alot of faults in me, and you were there for me,no matter what i done wrong. you are a loving and caring mom.who i love so much, iam sorry i can not be there for you i have you in my thoughtsand my heart.as i lie here in this hopital bed.i love you very much.i miss youand i will prayen for you. your loving son donald.

Mae was my mother-in-law and she was a good woman.. My kids and the family will miss her dearly.. My heart goes out to everyone.

Mae, I am so glad that God gave me the privlige of knowing you. You were someone that would light up my day when I saw you. I remember that you would see me coming down the lobby of the Windsor Manor, to go do something, and you would hurry over to the door and say wheres my hug or you can’t go out. Little did you know I would have hugged you anyway. You were my friend and I will miss you, until I see you again. To the whole Williams family I will keep you all in my prayers. Just remember Mae’s body is goen, but her spirit is with you, so as long as you remember her she will never be truly goen.

May, Mae see the light of God. And recieve his everlasting peace and mercy.

She was the best mother-in-law to me.

Sorry to hear of Mae’s death. I knew her when I worked with the Diocese as a journalist and saw her at the chancellory several times per week. I remember her as a friendly, competent worker who always greeted me with a smile, as someone who knew how to laugh. I always enjoyed seeing her.

to a beautiful women who gave me life to a kind and sharing person who gave me gudience to the women who i love more then anything in this world i will always love youuntill the day i meet you in heaven. i miss you but i know you are someone specil i will not be so selfish i will let you goyour loving son jessie

To Mae’s family: I have wonderful memories of times I stopped at the diocesan chancery – Mae was always smiling and helpful and I’m sure you miss her very much, but she is receiving her well-deserved reward.

TO THE ENTIRE WILLIAMS FAMILY

AT TIMES LIKE THIS, IT IS HARD TO FIND THE WORDS THAT BEST CONVEY MY THOUGHTS. BUT MAY IT HELP TO KNOW THAT THOUGH WORDS ARE FEW. I AM THINKING OF YOUR FAMILY WARMLY.

I’VE LEARNED IT IS GOD WHO STRENGTHEN, LOVE AND COMFORT US BEYOND ANY HUMAN CAPABILITY. MAY HE GIVE YOUR FAMILY MUCH MORE AND A ABUNDANCE OF ALL YOUR NEEDS.

TO THE WILLIAMS FAMILY;

I REMEMBER MISS MAE FRANCES DURING THE LINCOLN HOMES DAYS. IT HAS BEEN OVER TWO DECADES SINCE I LEFT THE VALLEY, BUT I CAN STILL SEE MISS MAE FRANCES SMILING,LAUGHING AND TELLING MY MOTHER,MISS DORA, AND I ALL HER ESCAPADES OF THE DAY. MISS MAE FRANCES WAS A GOOD WIFE, A GOOD MOTHER, A GOOD DAUGHTER, A GOOD SISTER, AND THE BEST GRANDMA. SHE LOVED HER FAMILY.WHEN MISS DORA’S WALKING WAS LIMITED.SHE WOULD BRING DINNER TO MISS DORA EVERY EVENING.MAY GOD AND HIS TENDER MERCIES BE WITH YOU IN YOUR TIME OF BEREAVEMENT.”COME UNTO ME ALL YE THAT ARE HEAVY LADEN AND I WILL GIVE THEE REST.”

TWO ALL OF THE WILLIAMS FAMILY IAM VERY SORRY FOR THE LOSE OF YOUR MOTHER. BUT SHE IS IN GOOD HANDS NOW IN HEAVEN LOOKEN DOWN ON ALL OF YOU AND PROTECTING YOU WHERE EVER YOU ARE. MAY GOD BE WITH YOU IN THIS TIME OF SORRY. AND PROTECT ALL OF YOU