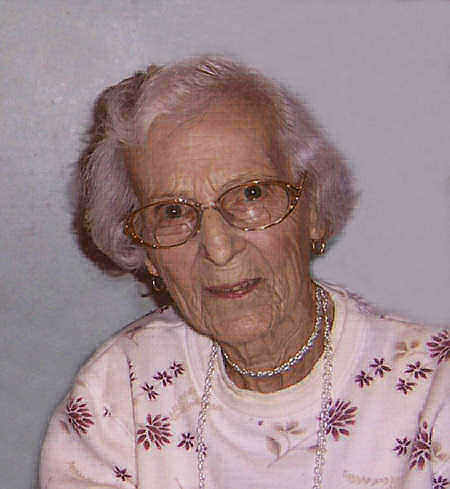 She was born May 23, 1918 in Armstrongs Mills, Ohio a daughter of the late John Thomas and Emma Mae Coffman Sindeldecker.

Luvada was a retired sales clerk for the former LS Goods Department Store in Wheeling, West Virginia and a member of the Lincoln Avenue United Methodist Church in Shadyside, Ohio.

In addition to her parents, she was preceded in death by her brother, William Scott and two sisters, Olive and Opal.

Family and friends will be received at the Bauknecht-Altmeyer Funeral Homes & Crematory 3900 Central Avenue Shadyside, Ohio on Thursday from 2 to 4 and 6 to 8 pm where services will be held on Friday at 11 am with Rev. Randy Weaver officiating. Interment in the Armstrongs Mills Cemetery in armstrongs Mills, Ohio.

Share your thoughts and memories with Luvada’s family at altmeyer.com.

I was so sorry to hear about Luvada’s passing. She and my mother were great friends and neighbors for so many years. She was such a kind woman and she will be very missed by all who knew her. May your memories bring you much comfort until you see her again in heaven.

We were so sorry to hear about Lavada.

You have our deepest sympathy. We will be away and unable to attend the funeral home or services.You will be in our thoughts and prayers.

May God bless and comfort all of you.

I’m so sorry to hear of her passing. Mrs. Lucas has been my neighbor for 20 years. She is so sweet and kind. She always asked how my children were doing.She would clip out their names for the honor roll from the newspaper. She always gave me tomatoes from her garden in the summer. I will miss her very much. She has gone on to live with our Heavenly Father. Bless you Mrs. Lucas.

Margie and Tom, So sorry to hear of your loss. I’ve heard my Mom talk about her so many times over the years. I know she was loved by many. Sorry I didn’t make it to the funeral home but we were on vacation and didn’t make it back until Friday nite about midnight. Again, my condolences. Connie

Margie and Tom, I am so very sorry for your loss. Please accept my sincere sympathy. Hugs, kisses and love.

May The Lord Blessing Be With You Always. You Have My Sympathy And My Prayers In The Loss Of Your Dear Mother. Thank You Very Very Much For Sharing Her Beautiful Lovely Picture She Remind Me Of My Own Love One That Just Passed Away And Family That Are Still Living Today Which Became Your Lovely Mother And Father Family In So Many Special Ways. Again Truly Sorry About Your Lovely Mother Passing. In Christian Love My Great Uncle Samuel Taylor Wheeler – Great Aunt Berthena Johnson Pittman Family That Became Your Lucas Love One Of Belmont Ohio – Monroe Ohio – West Virginia. Thank You