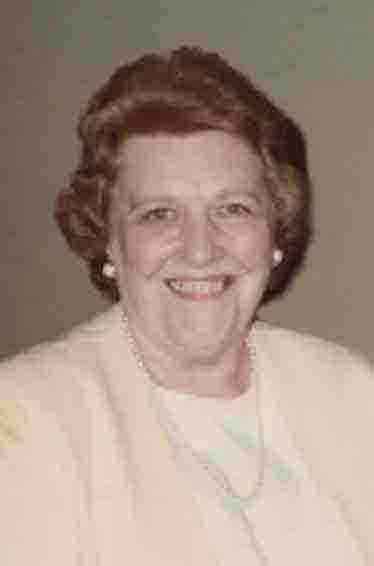 Lucile was born November 8, 1921 in Shadyside, OH, a daughter of the late William and Luetta Ross Kennedy.

During her career, Lucile traveled promoting Imperial Glass. She officially was director of marketing services for Imperial. She was instrumental in establishing the National Imperial Glass Museum in Bellaire, OH. She was a Christian.

She was deeply loved by her family and was always there for everyone in the family. She will be deeply missed.

Preceding her in death, in addition to her parents were three brothers, Arlie Kennedy, William, Kennedy, and Donald Kennedy.

Family and friends will be received at the Bauknecht-Altmeyer Funeral Homes and Crematory 441 37th Street Bellaire, Ohio Wednesday October 19, 2011 from noon until time of funeral service at 2p.m.

Memorial contributions may be made to: National Imperial Glass Collectors

A lady who Shared and filled the room with her love for mankind and her love for Imperial Glass. Lucile, you will be missed by many, including Audrey and I. God Bless!

Aunt Lucile became our “Mom” after our own mother developed Alzheimer’s Disease. She was always the one that kept track of my brother and sisters. Her love for glass has trickled down to many of her nieces and nephews. She is greatly missed.

I am very sorry for your loss of Lucile. We were graduates of Belllaire High School, 1939. I have many fond memories of her.

During many years as an Honorary Board Member of NIGCS, Lucile did not miss a meeting. She always told stories about Imperial and brought bags of candy to share. We learned about glass and about life from her. She will be sorely missed. Our condolences to her family.

I am so very proud to say “She was my Good Friend”. We had endless hours of phone conversations. During my years as President she was my right hand and information center. She was a great teacher. Lucile was the absolute perfection that a person could be. I shall never forget her telling me..”it is RUBY, not red”.I greatly admired her and all in the Imperial Glass World shall miss her presence.

My deepest sympathy to the family.

I am very blessed to have had Lucile as my Great Aunt and a GREAT GREAT Aunt to my three boys. I will always remember our car rides and singing John Jacob Jingleheimer Schmidt. Aunt Lucile would also have us count cows as we drove to Woodsfield to see Aunt Betty. I think she was just trying to keep the four of us quiet on the trip. One time in particular, I screamed out STOP THE CAR. There was a field of cows, and I still remember how she laughed and laughed about that one! She was a wonderful role model in my life. She will be deeply missed my me and my family.

I first met Lucile when we went to Imperial to do research for Candlewick Crystal. That was 30 year ago. Since then Lucile has advised and helped me with the series of nine books on Candlewick. We became good friends. Whenever in town, dinner was always a must. I loved her for the wondereful person she was. I will always miss her, her attractivness and her special laugh. God bless you, Lucile, and may you rest in peace.

I had the honor to meet Lucile as a reporter for The Times Leader. What a delightful lady; so full of knowledge and enthusiasm! Her passion to preserve the history of Imperial Glass touched so many people as did her charm, kindness and friendship! She will be greatly missed!

I have many fond memories of Lucile when she visited Ida Mazur I was Ida’s pastor in Shadyside. I carry in my purse a beautiful business card holder that Lucile gave to me on one of those visits. Remembering you in prayer as you trust in Jesus’ wonderful promises of the resurrection to eternal life. God bless you!

I worked at the Imperial Glass Co. with Lucille”in the Billing Department” and she was never anything but a kind,sweet person.

So sorry to hear of her passing. My prayers are with the family.

Jim and I knew Lucile best when we both became board members of NIGCS. She was a lovely person and will be missed.

Love you; thanks for all. RIP Jen

Lucile played a huge role in the development of the National Imperial Glass Collector’s Society. She encouraged collectors while at Imperial by providing history and details about the glass and company she loved.

Later, she encouraged many of us personnaly and collectively during the Society’s growth and the Museum’s establishment.

Her sense of appropriateness and encouraging spirit will be remembered and missed; yet, we celebrate her life and sympathize with her family.

How fortunate Judy and I are to have shared Lucile’s friendship, knowlege, and passion.

Lucile touched so many and in so many ways. She will be missed yet the memories of the times we had together will last forever. With our deepest condolences to her family.

Lucile was never to busy to talk glass or share her vast knowledge. She will be missed and remembered by all who knew her. Our condolences to the Family.

My sincere condolences to the family, friends, and loved ones in the loss of your loved one. My thoughts and prayers are with you.

So sorry to hear about Aunt Lucy’s passing. She will be missed. Glad I was able to be a small part of her life. In fact, I still have some books, gloves, and a scarf she gave me for Christmas one year. Hugs and prayers to the family.

To the Family of Lucile:

Lucile & I sat on the Board together at Belmont Technical College in the 1980’s. She was a lady of integrity and you could tell it from the decisions she made. She would always ask about our family when we would ride out to the college for meetings. We will miss her on this planet and look forard to seeing her again in Heaven.

Until the Messiah comes,

We looked forward to seeing Lucille every year at the NIGCS convention. She was always so willing to share her vast knowledge about Imperial. Her passing will leave a huge void at the convention. We were so extremely fortunate to have know her and shared time with her. May she rest in peace.

We will miss Lucile coming to our Big I Study Group meetings. She was always willing to share her Imperial knowledge and share stories of happenings at the Imperial Glass Factory. Our sympathy to her family and friends, she will be missed.

What a privilege to have met and spent time with this sweet lady! I am grateful for all the Imperial knowledge gleaned through Lucile, and she will fondly remain in the memories of all who knew her. My thoughts and prayers are with her family in their loss.