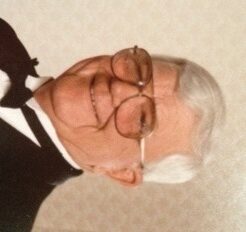 Loyd David Webb, 75, died Monday, October 1, 2012. Mr. Webb was born in TN to the late Levi and Bertha Webb. He was a Vietnam veteran having served in the US Army. Mr. Webb was raised as a Southern Baptist and was member of the DAV, American Legion and the FOP. He was predeceased by his brother, Samuel Webb.
Left to cherish his memory are his loving wife of 48 years, Mary Webb; children, Mike Webb Jan, Ricky Webb, David Webb Heidi, Jennifer Walburn Terry, and William Webb Allison; thirteen grandchildren and two great grandchildren.
The family will receive friends at Altmeyer Funeral Home, 5792 Greenwich Rd., Virginia Beach on Friday from 11 a.m. until 12 p.m. with a funeral service to immediately follow at the funeral home. Burial with military honors will take place at A.G. Horton, Jr. Memorial Veterans Cemetery following the funeral service. Condolences may be expressed to the family at altmeyer.com.

Mary, I won’t be there in person but know you and the family are in my thoughts and heart. I love you all.

You are all in our thoughts and prayers!