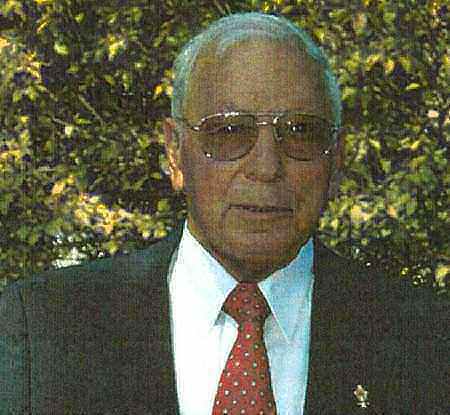 Louis Burke Hicky Smith, 94, passed away December 12, 2011. Mr. Smith was born in South Norfolk in his grandmother’s house on Jackson Street. He was the son of the late William Burke Smith and Helen Ostrander Smith. As a young boy he loved playing baseball, so much in fact that in High School in his senior year he flunked math so that he could play spring baseball. Boy, was his mother mad.
He was a versatile three-sport athlete for the Norfolk Division of William and Mary from 1936 – 38. He played football, baseball and track and field. He dominated his track and field events, scoring in all but one event during those two years. He remained undefeated in the high and low hurdles. As an outfielder, he led the team in batting in 1937 and later played semi-pro baseball. For his achievements in sports he was inducted into the Old Dominion University Sports Hall of Fame in 1999.
In 1941 he volunteered in the U.S. Army. When war broke out on December 7th, 1941 he was on maneuvers in North Carolina. He was transferred to Washington, DC for security detail, first at the Capital then at the War Department. In 1942 he was in Montreal, Quebec Canada for the Allies Quebec Conference of the Joint Chiefs of Staff. On a daily basis he saw Admiral Leahey, General George C. Marshall and Prime Minister Winston Churchill.
In 1943 he went overseas to the Pacific Theater where he participated in the New Guinea campaign under General MacArthur, eventually leading up to the Philippines campaign.
In 1946, he was discharged from the Army with the rank of First Sergeant . In July of that year he married his first wife, Lula and they had two children. William B. Smith Bill and David B. Smith. In 1972 he retired from the Naval Aviation Rework Depot after 28 years of service. In 1978 his wife Lula passed away and in 1982 he married his present wife Ethel.
In 2008 Ethel became a resident of Beacon Shores and in late May of this year Louis joined her and they have become known as the Love Birds of Wing 2. He had a wonderful sense of humor and was well loved and respected by everyone he met and will be greatly missed.
He was predeceased by his first wife, Lula Baker Smith and step-son, Frederick B. Higgins, Jr. He is survived by his wife, Ethel Fortune Smith, his sons, William B. Smith and wife, Mary, of Lansing, MI; David B. Smith and wife, Dale, of Virginia Beach, VA; grandchildren, Justin V. Smith and wife, Carly, of Charlestown, WV; Karen E. Smith and Brian S. Smith of Virginia Beach, VA; step grandchildren, W. Boothe Higgins and wife, Jennifer, of Portsmouth, RI and Rebecca Lanahan of Spring City, PA; step great grandchildren, L. Boothe Higgins, Audrey Higgins, Zachary Higgins, Max Higgins, and Nicholas Lanahan.
The family will receive friends Saturday, December 17th at Altmeyer Funeral Home, Southside Chapel, 5792 Greenwich Road, Virginia Beach, VA 23462 from 1:00 – 2:30 pm. A funeral service will follow at 3:00 pm. Interment will be Monday, December 19th at 3:00 pm at the Albert G. Horton, Jr. Memorial Veterans Cemetery, 5310 Milners Road, Suffolk, VA 23434.
In lieu of flowers, donations may be made to the DAV, Chapter 20, Virginia Beach, VA. Mailing address: 4896 Kempsville Greens Pkwy, Virginia Beach, VA 23462

Knowing your father was s pleasure. When there was a lull in the conversation and everything might have seemed dull, you needed to watch out! He would surprise you with comments that had you smiling. We will recall and treasure these memoires ñ the ìLittle Things.î

Smitty was and will always be an inspiration in every sense of the word regarding what is best in life. He will be sorely missed in this world, to be sure, but we take solace knowing he is now in a better place in Heaven with a spring in his step and a song in his heart. He lived a good long life, always a faithful servant of the Lord, his family, his church, his alma mater, his community, and his country, demonstrating such great care and concern for the world around us. I will mostly remember his love of sports, his wonderful sense of humor, and his singing voice, fond memories that I know I share with all of us who were simply privileged to know him.

So sorry Smitty is no longer with us but today he is rejoicing in heaven with no more pain or grief. We shall miss his beautiful smile and cheery attitute. He was loved by our family very much.

You guys rejoice with the knowledge that he is now with God and you were there to meet his earthly needs. No regrets.

Love to you and yours

Sid’s bipass went well. We are home and wish we could have been at the memorial service with you.

To Dave and Dale Smith and Family

I would like to express my sincere condolences to your family. We are never ready for a love one to leave us. When you get lonely, think of all the memories he has brought to each and every one of you. When you are sad, remember the funny things he did that made you smile. Always remember.. You now have a special angel watching over you.

We are so sorry about your father and you have our deepest sympathy. Dave, your father was so kind and humorous and a great citizen of our country.We are so happy we got to know him and Ethel. We love you so much

We did not know Mr. Smith but heard many good things about him through his granddaughter, Karen. and our son, Michael. He was an amazing man. We knew of some of his athletic accomplishments, but not his involvement in WWII. It would have been fascinating to get his take on Marshall and Churchill. He clearly was loved by his granddaughter and that may be the biggest accomplishment of anyone’s lifetime.