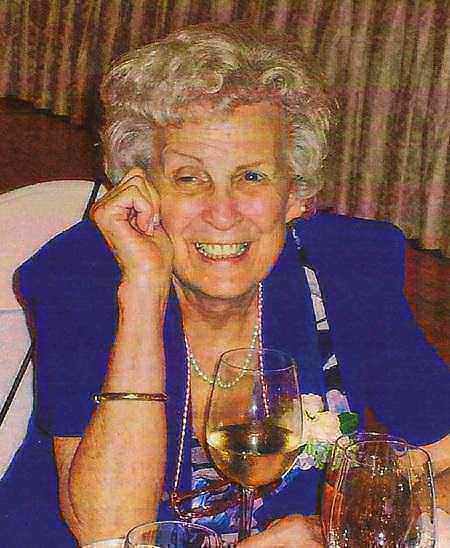 Lorraine Rhodes Thorley passed away peacefully on August 31, 2012 after a valiant battle with ovarian cancer.

Lorraine was born May 7, 1933 in Canton, Ohio. She and Jim were married on November 5, 1949 in Grey’s Lake, IL. They then began life as a military family, living in Maryland, Guantanamo Bay, Cuba, Tennessee, Rhode Island, Florida, and Virginia. Their 62 years of life together were filled with travel, children and grandchildren, church, and community.

Altmeyer Funeral Home, 5792 Greenwich Road, Virginia Beach, VA 23462 is in charge of the arrangements. A memorial service will be celebrated at St. Francis Episcopal Church, 509 S. Rosemont Road, Virginia Beach, Virginia on Sunday September 2, 2012 at 1:30 pm. A reception gathering of family and friends will follow. Memorial donations, in lieu of flowers, are suggested to St. Francis Episcopal Church. Condolences may be offered to the family at altmeyer.com

Aunt Lorraine is a very special person and her passing is felt by so many she took into her home and heart. Uncle Jim shared her love for family,friends and fun and often showed others how to do the same. He took my foster brother and me to a Tidewater Baseball game at the Collosium when we were just 9 and Aunt Lorraine gave us treats.We hope all the nice memories will be a comfort to all. In Jesus name…Christopher,Alice&Luke

Beloved sister and sister-in-law. A great friend who raised a wonderful family. Always loved and will always be missed.

Goodbye my friend. your warm smile and wit haave brightened many days.We will miss you greatly.

I am so sorry to hear that Aunt Lorraine passed away. But I am sure she and my mom had a wonderful reunion in heaven. You all are in my thoughts. Love and strength to you all.

It is with shouts of ‘hallelujah ‘ that we celebrate dear Sister Lorraine’s home going to heaven where there is no pain or tears! And it is with tears of sadness that we mourn with her wonderful husband Jim and her dear children. We hurt for our loss but rejoice in her victory over death. From the youngest to the oldest- I love you Lorraine. Larry & Vicki

Jim, Much sadness at your loss. I have fond memories of Lorraine. A wonderful life’s partner. She is missed.

Kevin and I wish to express our condolences to all the family on your loss. Jim and all who spoke at the memorial service today, thank you for sharing your memories. Lorraine was a wonderful lady–naturally, since she was from Ohio, my home state. We also have military life in common; Lorraine clearly grounded the family, which takes a lot of strength and faith. Our prayers are with you all. In Christ, Lynn

Lorraine was a special lady, the best neighbor and a good friend. She will be missed greatly by us and all who had the privilege of knowing her.

Love and miss you Aunt Lorraine. Give my Momma kisses, I know she was there to greet you.

Love you Uncle Jim. Sorry I can’t be there. My prayers are with you and the family. Love Miriam

Please accept my deepest sympathy! I just learned of the loss of Lorraine.

She was a sweet lady who was loved by her neighbors and friends.

I am happy that I was able to visit you both this summer. Lorraine had so much to say and I enjoyed her company.

She will be remembered fondly.

My condolences & Love to Michelle & the Thorley Family.

MY SISTER WILL BE GREATLY MISSED . BUT NEVER FORGOTEN

My wonderful aunt “Meringue”. I loved and adored you before I could even say your name. Thank you for a lifetime of wonderful memories and being a living example of the kind of woman I want to be and the marriage I dream of having. Love you and Uncle Jim always.

Our deepest sympathies to all of the extended Thorley family on their loss. She loved her family and we will all miss her dearly.

The Thorley Family are in our prayers. We will miss her dearly.

This is for both our loved,adored and respected Lorraine and Jim.We were not looking forward to this,news,yet something comforting in the fact that our beloved Lorraine is dancing with Jesus as we speak… and Jim is being comforted by Him and family,also. I can not say enough about what life and love lessons they both have spoken to myself and Glenn throughout the many years we went to visit them, they also taught us how family can also be friends.We were always given the welcome matt and well taken care of under their roof and our love grew & grew. She will be so dearly missed. I pray for the days,weeks and years to be kind to you,Jim. You signed a letter to us once, “Your sisters loveing servant”, and I will never forget that,because you spoke volumes in that little closing about how you felt about her and what she ment to you.We wives should all be so lucky to hear those endearing words. Your loss is felt. We love you both.

To the “Rhodes/Thorley” girls…what can be said for what you have,are,and will go through as daughters and woman. Your love for the values your mother and father instilled in you are not only evadent in each of you,but also in your children. Lorraine is smiling down on all of you and she always spoke well of each member of her family.Be proud girls, Grandchildren and Great-Grandchildren. And you still have a lot to learn from Dad,grandpa Jim and great-grandpa Jim.

Our condolences,and love also go out to Lorraines brothers and sister and also her friends. Glenn Rhodes Family

I’m so sorry to hear of Aunt Lorraine’s passing. What an amazing woman she was – she helped out so much when my mom was sick, she trusted me to back that huge car out of the barn ! and we loved when her, Uncle Jim and the cousins came to KS. I know Mom is there with her yakking as I type.

Uncle Jim and family you are all in my prayers. Mom always enjoyed the visits when you all came to see her.

We will say a prayer and remember Lori as a dear and great friend. She was always there to help others. Bob especially remembers Lori helping him with the ‘Cuckoo’ tournaments and the Aerie’s Olympic Tournament which you ‘Jim’ took home the gold as top performer. Also, Ellie passes that Lori was a great Vice-Mother to the ‘Red-Hat Cuties’ with her words of wisdom that lead the group to bigger and better times. We indeed had some great times together. We will certainly treasure all the good times we shared with you and Lori. May you ‘Jim’ rest in the knowing that she is now looking down at us with a bright smile. Here’s wishing you good health, spirit & safety now and in times to come. Anything we can do, just call. The very best, Bob & Ellie.