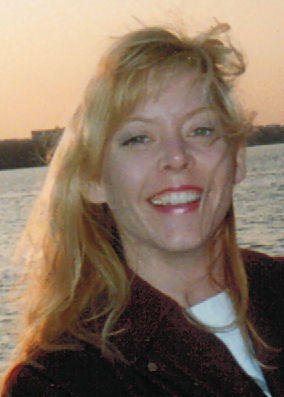 Lisa Bratton Rippel, 47, of Rockwood, TN passed away on August 27, 2012. She was born on July 8, 1963 in Biloxi, Mississippi to the late Andrew and Shirley LeMasters Rippel. She graduated from Pensacola High School in 1983. Some of her best memories were from Color Guard and High School. She furthered her education at Pensacola Junior College Certificate with a degree in Medical Secretarial Science in 1986. After graduation she moved to San Diego where she had one of her most rewarding jobs working with children at Southern California Orthotics and Prosthetics. She continued her career in the medical field when she moved to Virginia Beach in 1991. She worked for AcSel Corporation working as an Administrative Manager. She continued to work for them after she and Jacky moved to Rockwood, TN in 2009.

Lisa loved astronomy, archeology and traveling. One of her favorite trips was to the Greek Islands. She loved the white sands of Pensacola as well as the black sand at the beach in Santorini. She loved going to concerts and visiting with family. She loved the water; whether it was boating, being on the lake, near a pool, fishing or taking her son to the beach. She loved palm trees, sea shells and wind chimes. She donated her hair to Locks of Love for Cancer patients and her favorite charity was St. Judes Children’s Hospital.
She is survived by her husband Jacky Bratton; son Devin Rippel; son Trevor Bratton; dad Dedrich Dick Hohorst; brothers Andrew Rippel, Aaron Rippel, Christian Hohorst, and Kurt Hohorst; sister Barbara Frisina Rippel; and many nieces and nephews. She will be greatly missed by all who knew her.
A service to commemorate Lisa’s life will be held at noon on Saturday, September 22, 2012 at Altmeyer Funeral Home, 1801 Baltic Avenue, in Virginia Beach.

Lisa and I were co-workers for many years at AcSel. She helped me though some difficult times, both personal and professional, and was always supportive when I needed a shoulder. Even after moving to TN she and I had a chance to give each other some personal support and enjoy a laugh now and then. Her life ended too soon and may she now be resting in peace. My prayers are for the family and especially for Devin. May each of you try to remember all the good times and turn your tears into a smile with you think of Lisa.

My Deepest condolences to the Jacky & Devin and the family. I worked with Lisa at SCOPe in San Diego and would carpool from Escondido after we would drive Devin to school. She used to tell me all about her family. We kept in touch over the years, I loved her Yearly X-mas letters with the pictures. I hope she is resting in peace.. All my Love and Prayers to you all especially Devin.

Our hearts and prays go out to each family member …she often talked of how she missed and loved each of you. I was lucky to have known her and to have worked under her for even a brief time . She was quie Lady!

To the Bratton Family Hey Jacky this is Ike we were shipmates onboard Uss Kidd man and I apologize for your loss…May GOD be with you man during this difficult time and when you get a chance shoot me an email message…you take care and be strong..Ike