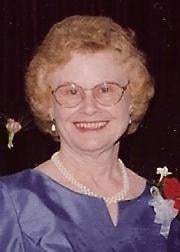 Lindsay Hazel Warren went to be with the Lord on Friday, February 22, 2008 in her home in Newport News, Virginia after a brief illness.
Hazel was born on August 29, 1928 in Littleton, North Carolina. She recalled with great admiration the turned down pages of her mother’s Bible as she read through it. At age 7, Hazel chose to ask Jesus to be her Lord and Saviour. She credited her mother’s steadfast love for God’s word for helping lead her to salvation.
At age 12, Hazel and her family moved from her childhood home in Rural Halifax County, North Carolina to a large farm in Warren County, North Carolina. It was there that she would meet the love of her life. While riding the school bus, a handsome young man wedged himself between Hazel and her brother and boldly asked, “How’s my little girl?” Seven years after that bold introduction, Hazel married Alfred Lee Warren on July 19, 1947 before a Justice of the Peace in Emporia, Virginia.
In addition to being a loving wife, mother, grandmother, great grandmother and friend, Hazel was a faithful member of Riverside Baptist Church for 50 years. She lovingly served in many capacities including Young At Heart Group, Joy Sunday School Class, and volunteered in many other events. Hazel is remembered for her fun and caring personality; her devotion to her children and steadfast faith in her Creator. She was a poet and an artist.
She is precedded in eternal rest by her husband, Alfred Lee Warren; her parents Andrew Jackson “Jack” and Lonnie Simmie Ellis; her brothers Freeman, Dalton, Elmo and Murphey; her sisters, Ruth, Annie and Blanche.
She leaves to cherish her memory, four sons: Randall Steve Warren, Glen Allen Warren, Danny Lane Warren and Mark Andrew Warren; her sister Lorene Draper; four daughter-in-laws, Margaret Warren, Sharon Warren, Amaris Warren and Brenda Warren; seven grandchildren, Rachell Turner, Joshua Warren, Jeremy Warren, Cindy Warren, Megan Warren, Chloe Lindsay Warren and Ivy Madison Warren; and two great grandchildren, Molly & Rose Hill.