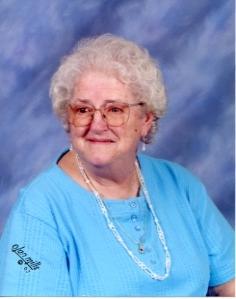 Letty E. Mattern, age 91, of Lisbon, Ohio passed away at the Vista Care Center in Lisbon on Saturday, June 29, 2013, after an extended illness.

Born in Leetsdale, Pa. to the late Archibald C. and Jennie M. Rine Lang on February 7, 1922. Mrs. Mattern moved to Lisbon in 1963 from East Liverpool where she had worked in several area potteries in East Liverpool, Chester, and Newell before retiring. She was a member of the Assembly of God Church in Lisbon, the Lisbon Senior Citizens and was a Tupperware dealer for 25 years.

In addition to her parents and husband, she was preceded in death by one son, Edwin Mattern Jr., two brothers, Roy and Archie Lang, two sisters; Helen Pike and Dorothy Jackson and two son-in-laws; Bob Moser and Terry Sine.

Services will be held at the Calcutta Chapel of the Martin MacLean Altmeyer Funeral Homes on Wednesday, July 3, 2013, at 11:00 AM with Pastor Gregory Pennington of her church officiating. Burial will follow in the Columbiana Co. Memorial Park.

Family will be present to receive friends at the Calcutta funeral home on Tuesday from 2 to 4 and 6 to 8 PM.

I am truely sorry for your loss! My thoughts and prayers are you!

So sorry to hear of Letty’s passing. She was a wonderful lady. Prayers from the Wingett family.

So sorry to hear of your family loss. I am sending our sympathy.

So sorry to read about Letty passing. Hugs to all. Gloria