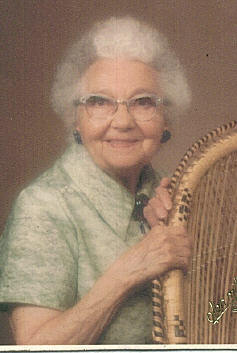 She was the daughter of the late W.R.C. and Sina Grimm Myers. She was a member of the Kingdom Hall Jehovah’s Witnesses West Congregation, Canton, Ohio and a homemaker.

In addition to her parents she was preceded in death by her husband, James Russell Strosnider in 1962, two sons; two sisters and three brothers.

Friends recieved from 11:00 am Wednesday, June 27, 2001 until the time of service at 1:00 pm at the Altmeyer Funeral Home, 118 Grant Avenue, Moundsville, WV 26041. Officiating will be Mr. John R. McCabe. Interment in the Peninsula Cemetery, Wheeling, WV