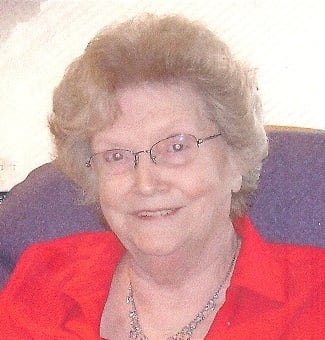 Leota M. Allen, 82, of Moundsville, W. Va., died Sunday, September 16, 2012 at home, surrounded by her family.
She was born March 4, 1930 in Marshall County, W. Va., a daughter of the late Oscar and Laura Bartrug Crow. She was a member of the Roberts Ridge Church of Christ in Moundsville.
In addition to her parents, she was preceded in death by her husband, Brooks D. Allen, and one daughter, Sandra Krishnadev.
She is survived by one daughter, Bobbie Dean Eddy of Moundsville; one sister, Evelyn West of West Liberty, W.Va.; three brothers, Raymond Mary Crow of Moundsville, Bernard Karen Crow of Moundsville, and Sherwood Goldie Crow of Niagara Falls, N.Y.; three grandchildren, including Tammy Kevin Smith and Missy Shane Helms; three great-grandchildren, Karley Smith, Landyn Helms, and Jackson Helms; and several nieces and nephews.
Friends will be received Wednesday, September 19, 2012 from 6-8 pm at the Altmeyer Funeral Home, Lutes and Kirby-Vance Chapel, 118 Grant Avenue, Moundsville, where funeral services will be held Thursday, September 20, 2012 at 11 am with Evangelist Brian Price officiating.
Interment will follow at Riverview Cemetery, Moundsville.
Online condolences may be offered to the family at altmeyer.com.

Aunt Lee will be missed more than words can express. I will forever be grateful to her for all the love and support she has shown me over the years. She was someone I knew I could always talk to and count on. She will forever be in the hearts of Madison and I. My deepest sympathy goes out to all those who loved her. May she rest in peace.

To all who called her Mother ,sister,aunt,grandma and friend we send our sympathy for your loss.