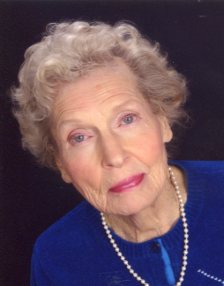 Lenora Agnes Cottrill Goddard, 91 formerly of Chaffin Street, East Liverpool, OH died on Saturday, October 22, 2011 at the Riverview Pointe Care Center in Olmsted Falls, OH. She was born in West Union, WV on November 2, 1919 and was a daughter of the late Charles D. and Agnes Smith Cottrill.

Living most of her life in this area, she was a homemaker. She moved to Olmsted Falls in 2004. Mrs. Goddard was a graduate of Doddridge High School and a member of the Second Church of Christ where she was a deaconess.

Services will be held at the Calcutta Chapel of the Martin MacLean Altmeyer Funeral Homes on Saturday, October 29, 2011 at 10:30AM with Alan Boone, former Assistant Pastor of the Wellsville First Christian Church officiating.

The family will be present to receive friends at the funeral home in Calcutta on Friday, October 28, 2011 from 2-8PM

The family requests Memorial Contributions be made to either the Second Church of Christ or Angels for Animals.

Your mom was always kind to me.

In Heaven…All things will be made new.

Deborah’s and my condolences. We don’t know how we can help, but if there is, please let me know at my email address.

I loved her and was glad to visit her 3 years ago at the reunion .She will be remembered in my heart. I wish that I could have been there but my wife is really sick and I have to take care of her.Love John & Kim

It’s been many years, but I fondly remember Mrs. Goddard from Second Church. She was always nice to me and would always have a smile for me. I was a child/teenager

Please accept my sincere condolances during this difficult time.

My condolences to the entire Goddard Family. Lois, know that I am thinking of you and your family at this time.

My deepest sympathy to you, Cathy, and your family.Your mom was a dear lady. My mother loved for her to sit on the porch and rest before continuing to walk up Penn Ave. Once in a while she would let mom drive her home, but she preferred to walk most of the time.

She always updated mom with news of your family and asked about all of us. She was sweet to me and proud of her children. I know you will miss her. May she rest in peace.

My deepest sympathy to your family. May God grant you strength during this most difficult time.

My sincere sympathy in the passing of your loved one.

Our prayers are with you during this difficult time. So sorry we weren’t able to make the trip.