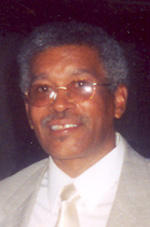 DENNARD, Kenneth Oswald, 68, of Wheeling WV, died Thursday, August 13, 2009 at Wheeling Hospital. Born in Wheeling on December 25, 1940, Kenneth was the son of the late Kenneth and Phyllis Francis Dennard. He retired in 1991 from Cleveland Gear, Cleveland OH, prior to coming to Wheeling. He was a current employee of the Good Shepherd Nursing Home and was a veteran of the U.S. Army. Kenneth was a member of Macedonia Baptist Church where he served as Chairman of the Deacon Board. He was a person of devotion and prayer. Kenneth was the #1 Cleveland Browns Fan and was a member of the basketball coaching staff at Wheeling Central Catholic High School. He also was the long time score keeper for the team. Surviving are his wife Paula Lee Dennard; five sons, Kenneth O. Dennard III of Cleveland OH, David A. Dennard and his wife LaDonna of Wheeling, Kevin T. Dennard of Cleveland OH, Rodrigues R. Lee and his wife Michele, and Ricardo R. Coleman all of Wheeling; five daughters, Denice L. Williams and her husband Kevin, Dana L. Hill and her husband Joseph, Dionne L. Dennard and Dawn Dennard all of Cleveland OH, Rica M. Dabney and her husband Haryl of Wheeling; two brothers, Raymond L. Dennard and his wife Mairiam of Hallandale Beach FL and Thomas M. Dennard and his wife Patty of Wheeling; a host of grandchildren, great grandchildren, great great grandchildren and nieces and nephews. Kenneth is also survived by a special friend his dog Doc Dennard. Friends will be received at Macedonia Baptist Church 105 12th Street, Wheeling WV on Tuesday, August 18, 2009 from 2-4 and 6-8 pm. where services will be held on Wednesday at 11am. Interment will follow at Mt Calvary Cemetery. Arrangements by Altmeyer Funeral Home, 1400 Eoff St. Wheeling WV . Online condolences may be expressed to the family at altmeyer.com.

We would like to extend our deepest sympathy in the loss of your dear husband. We know this is a great time of sorrow for you and your family. We pray that God will give you the strength you will need to endure. May it comfort you to know that he is at rest with our Lord and Savior and that you will see him again.

You are in our thoughts and prayers. God bless you.

IM GONNA MISS YOU UNC..IM GONNA MISS CALLING YOU ON THE PHONE AND TALKING ABOUT THE CAVALIERS AND TEASING YOU WHEN PARK PLAYS CENTRAL IN BASKETBALL…I REMEMBER JUST SITTING ON THE PORCH AND WE WOULD JUST TALK ABOUT SPORTS FOR HOURS. WHEN I HAD MY SON YOU AND AUNT PAULA ACCEPTED HIM INTO YA HOME WHILE I FINISHED SCHOOL AND I APPRECIATE THAT WITH ALL MY HEART. TO MY AUNT PAULA I JUST WANT YOU TO KNOW THAT I LOVE YOU AND I WANT YOU TO BE STRONG. TO UNCLE KENNY WHEN THE CAVALIERS WIN THE CHAMPIONSHIP THIS YEAR I KNOW YOU GONNA BE SMILING AND IMMA LOOK UP AND SMILE RIGHT BACK AT YOU AND IMMA SAY “UNC THIS ONES FOR YOU”

Kenny was a great man, he will be missed by all of his fellow workers and friends at the Good Shephard Nursing Home.

Kenny will be missed dearly.I will have noone from work to help me back up the Browns now.

Kenny, David, Neicy, Dana, Kevin and Dionne, we are so sorry to hear about the loss of your father. Our thoughts and prayers are with you.

Kenny,David, Neicy, Dana, Kevin and Dionne I was so sorry to hear of the loss of your father. May God bless you in your time of sadness. You are in prayers.

Kenny,David, Neicy, Dana, Kevin and Dionne may God surround you with his love and peace during this time. You are in prayers.

Kenny,David,Neicy,Dana,Kevin and Dionne you are in my prayers.

My sympathy to Kenny,Niecy,David, Dana, Kev and Dionne in this time of grief, my thoughts and prayers are with you.

My sincere condolences to you and your family at the passing of your husband. Although our time together was too brief, Kenneth was a fine gentleman and one that I respected.

We were sorry to hear about the passing of Kenneth. He was truly a man of God. We enjoyed hearing him pray when we visited Macedonia. We will keep you in our thoughts and prayers during this difficult time.

Paula and the Entire Dennard Family,

We are keeping you in our prayers. May the Lord continue to strengthen you all and to comfort you during this time of transition.

I was deeply sadden to hear of the lost of your husband. Sending warm, healing thoughts to lift your spirits and help you get through your time of sorrow.

Paula, and The Dennard Family,

Our loss is heavens gain. Kenny was a very long time friend. He will be missed. All of you are in my thoughts and prayers. Be strong, and know if God brought you to it, He will take you through it. Be blessed and know that God loves you, and so do I. Praying for you.

Paula, you have my deepest and sincerest sympathies. I truly understand your pain and sorrow. I am here for you anytime. May God Bless and Keep You. Love, Charlotte

Paula: I was sorry to hear of Kenny’s passing. I called the hospital on Friday morning but you were sleeping. I wanted to pray with you.

May God give you the peace that passes all understanding and give you strength as you go through this difficult time.

You and your family are in my thoughts and prayers.

Sorry to hear about your lost. You can remember all the good times you and your husband had together and hold them dear to your heart. He is in God hands now and there is no other place he can be at peace. God bless you and I’ll keep you in my prayers Dolores Harris

Suffragan Bishop Lewis Fitzpatrick, Mother Mary Fitzpatrick and the congregation of Calvary Apostolic Assembly offer our deepest sympathy and prayers in the loss of Deacon Dennard. Isaiah 51:11 Therefore the redeemed of the Lord shall return , and come with singing unto Zion; and everlasting joy shall be upon their head: they shall obtain gladness and joy; and sorrow and mourning shall flee away. Respectfully submitted.

This is cousin Paul. I hadn’t seen

Kenny since we were kids, but I’m very sorry to hear of his untimely death. My condolences to all his family.

To Aunt Paula and The Entire Family,

I was deeply saddened and shocked to hear about your loss. My deepest heartfelt prayers and sympathy are with you. I know that he was a great man. “Rakedra” spoke so highly of him, during the summer while she was here with us, in Flint. So often it seems as though the people we “love and cherish” so much, are the ones who depart from us so soon. I know that you will cherish his love and memories in your hearts forever.

To Paula and the dennard Family, Kenny and I have been friends for quite a number of years and we always talked about the trip to New York when we were together. I will miss him for he was always there for me whenever I called him. I thank God for the last time we were together, him and his wife Paula had breakfast together two weeks ago. He will be missed by all . Keep lookig to the Lord for strengh.

To Raymond and Tommy and the entire Dennard family:

Please accept my deepest sympathy for the loss of Kenny. I am glad that I got to see Kenny at the Wheeling Reunion on July 4, 2009. I have very fond memories of our early days at Blessed Martin and both of our families sharing in those times together.

TO RODRIKA, THE LEES AND THE DENNARD FAMILY:

FROM DAISY McGHEE PEARSON AND FAMILY;

To The Dennard and Lee Families:

I would like to extend my deepest sympathy in the loss of your loved one. I only knew Ken for a short period of time, but I know that he loved the Lord and was very dedicated to his church. Know that God will give you strength and guidance to get you through this very difficult time.

God Bless each and every one of you.

To the Dennard Family,

Uncle Kenny was a wonderful, wonderful man. He will be sadly missed by all.

With deep sympathy, I send the family my condolences and pray that GOD be with you at this difficult time.

To the Dennard family,

and the Lee family. I am sorry for your loss of your love one. Kenny was a great access to the community. I am praying for your family.

To The Dennard Family:

To the entire Dennard family;

Our thoughts and prayers are with you during this time of sorrow. Jesus will lift you and keep you lifted as you endure the pain of your tremendous loss.

To the Family of Kenneth Dennard:

Our deepest sympathies and prayers are extended to you upon your loss of Kenny.

May God comfort you and keep you in perfect peace.

To Tom Dennard, Patty & Erica: I am sorry for the loss of your brother and Uncle.

May you find comfort in God and in the memories you hold in your heart.

You’re in my thoughts and prayers.