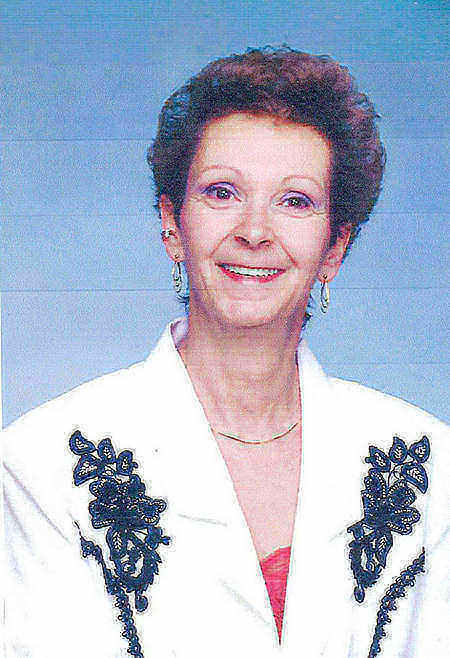 Kay was born July 27, 1942 in Glen Dale, a daughter of the late Guy A. and Hester A. LeMasters Wood. She was retired from Ohio Valley Animal Center and was a member of the Moundsville Church of Christ. She became a licensed masseuse in 1986, and had a large clientele in the valley. She was also an avid camper & wood carver and worked in the animal care field for 12 years.

In addition to her parents, Kay was preceded in death by three brothers, Guy A. Wood, Jr., Phillip F. Wood and David Wood; and two sisters, Martha L. Pettit and Jean L. Pettit.

Friends will be received from 12-8 pm, Sunday, at the Altmeyer Funeral Home, Lutes & Kirby-Vance Chapel, 118 Grant Avenue, Moundsville, where funeral services will be held at 11 am, Monday, December 30, 2013, with Denzil Butler officiating. Interment will be in Halcyon Hills Memorial Park, Sherrard, W.Va.

Aunt Sissy was one my most favorite aunts. She was so fun to be around and would always bring a smile to my face. To me she was very wise, caring and a good listener. I really admired her. My thoughts and prayers go out to Guy, Brett, and Brock at the passing of their mother.

Dear Boys, My dad, momBud and Mary and I had a wonderful visit with your mom in July! It had been years since I had seen her and our visit gave us some special memories. I will keep all of you in my prayers, there is no one like “mom”! God Bless You All Mary Beth

I am so terribly sorry for your loss. I remember your mother as a wonderful, compassionate and happy lady. It was great have been able to know her and spend the time with her that I did. God Bless all of you and I pray that you will find comfort and peace at this difficult time.

I was very saddened to hear about the passing of your mother. I haven’t seen her since my dad passed away and I was very grateful for her making the trip to be with us on that sad day. I’ll always remember her smile, she always had one on her face. I believe she is in heaven now with my dad and all of the Wood family. God bless you all.

Guy, Brett, Brock, My thoughts and prayers are with you during This difficult time. Aunt Sis will be missed.

I would like to share a few words with you in the bible at Isaiah 25:8 here god says he will wipe away all tears from your eye’s and swallow death or wipe away i hope these words bring comfort

I so sorry to hear about Aunt Sis’s passing. You have my heart felt condolences. I have so many fond memories of her from our visits to WVA and her visits to OK. You are all in my thoughts and prayers. May God pour our his love, peace, and comfort on you during this time.

Kay Hawkins was a friend and mentor to me when I was a young woman. She was smart, funny, worldly, and open-minded and she always had time . . . mostly to listen but once or twice to chastise when sorely needed. Kay was fiercely but quietly protective of her boys, whom she adored. I will remember her fondly and extend my sincerest condolences to Guy, Brett, and Brock.

Kay was a classmate beginning

in grade school thru our high

school years. She will be missed.

Kay was a wonderful person. I will miss her. My prayers are that she is in heaven with the Lord.

Kay was one special person. We became friends years ago, and I took her sons beagel bassett-Sophie who lived to be 14! She was special and I will always be Blessed that we were friends. God Bless you Kay,RIP in Our Lord’s arms!

We grew up in the east end of Moundsville and were classmates at Moundsville High. Kay was a friend to many and I have fond memories of our times at MHS . My prayers are with the family as you go through this trying time .

We send our deepest sympathies to your entire family. Kay and I were raised in Glen Dale and I cherish my memories of her in school and as a friend. God bless each of you as you go day to day with precious memories of Kay.

We share your sadness and your loss. SIS was very dear to Mary and I. I have many good memories of our younger years living in mdsv. and out on grave creek. she was my baby sister and we had good times together. when we lived in the east end, Dad always called her his “happy wanderer’ because we often did not know where she had wandered off to. but neighbors would look after her and often bring her home. sorry we were not able to come up. hope the flowers are okay. if any of you get an opportunity to come this way, we would be glad to see you. your mother was a good woman, and we can expect to meet her in heaven at the eastern gate to llve in freedom and joy forever.

god bless you all. in

We’re so sorry to hear of Sis’ passing. She was very dear to my Daddy, Don Sr. We always enjoyed seeing her at the Wood reunion. She will be missed. You’re in our thoughts and prayers.