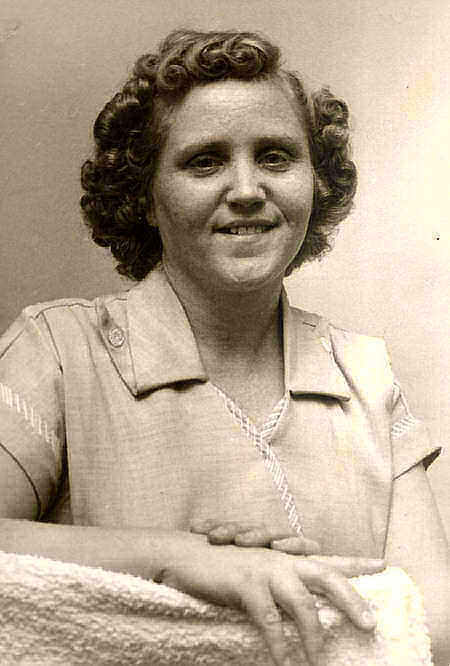 Kathleen M. Smith 85 of Wheeling, WV passed away Friday July 27th at 3:45am in Ohio Valley Medical Center. She was born Nov 30, 1926. She is survived by her husband Ralph H Smith of Wheeling, W Va. Sons: Ralph Eugene Smith of Wheeling, W VA., Robert Lynn Smith of Lakeland Fl., and Daniel Lee Smith of Wheeling, W Va.
She was preceded in death by parents Clayton Morrison and Cora Layton. In addition to her parents, she was preceded in death by sisters: Mary Ann Walters and Lena McClung. Brothers: Arby Morrison, Paul Morrison and Wayne Morrison.
She has 12 Grandchildren, 9 Great Grandchildren and several nieces and nephews.
Friends will be received on Monday, July 30 from 3-5 and 6-8pm at the Altmeyer Funeral Home, 1400 Eoff St., Wheeling, and on Tuesday, July 31 from 2-4 and 6-8pm at the Davis Weaver Funeral Home, Clarksburg, WV where services will be held on Wednesday, August 1 at 1:00pm with Rev. Randy Smith officiating.
Burial will follow in Greenlawn Masonic Cemetery, Clarksburg, WV
Online condolences may be extended to the family at altmeyer.com.

“We keep in our hearts forever the memories of those we have loved.”

With Deepest Sympathy to Kathleen’s family.

Grandma you will always be in my heart and memories. I will always love you. To my family I am so sorry I cannot be there with you but I want you to know how much we love you and that you guys are in our hearts.

I am so sorry to hear of Mrs. Smith’s passing. I was able to meet her with my cousin Marisaher granddaughter not too long ago while in West Virginia. The Smith’s were very kind in opening their home to me during my stay. The love between them still seemed so strong and my condolences go to Mr. Smith and the family members for their loss.

I will miss calling her at thanksgiving about my turkey. I send my love and hugs to Ralph Danny Ralph Jr and Bobby. May God keep you all safe and blessed.

It was my pleasure and honor to help care for Mrs. Smith when I worked as a nurse at OVMC. She was truly everyone’s “favorite patient”. I am very sorry for your loss.

My deepest sympathies to the family. Mrs. Smith was a very nice and caring person. May she rest in peace in Heaven.

To Mr. Smith and Family,

Kathleen is in Heaven now with all her family that has gone before her and have waited to see her again while she was here with us. You rest in peace knowing that.

I will miss her so much. She was a wonderful Mother-in-Law and a very sweet and caring woman. I will never forget her.

To the family of Mrs. Smith, We are so sorry for your loss. We knew her as a beautiful lady who was always so calm, with a wonderful husband who was always with her.