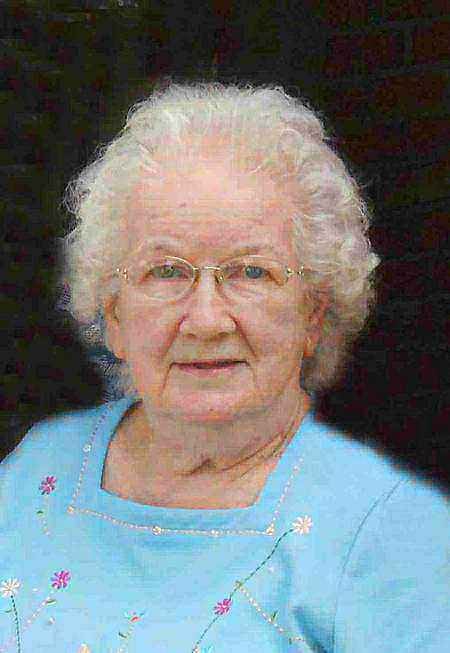 She was born June 28, 1924 in Glen Dale, WV a daughter of the late Norman D. and Nellie Buzzard Peabody.

June was Retired from Reynolds Memorial Hospital, Glen Dale, WV and worked with her late husband at the Powhatan Lumber Company for many years. She was a member of the Immanuel United Church of Christ, Clarington, OH, Golden Links Circle, National Society of Daughters of American Revolution, Wheeling Chapter, Order of Eastern Star, Clarington Chapter # 533, Formerly active in the Wheeling and Powhatan Women’s Club, a 1942 Graduate of Moundsville High School. She devoted her life to her family.

Family and friends will be received Thursday from 2-4p.m. and 6-9 p.m. at the Bauknecht-Altmeyer Funeral Homes and Crematory 186 Main Street Powhatan Point, Ohio where funeral service will be held Friday at 11a.m. with Reverend Terry Pringle officiating.
Interment follows in Powhatan Cemetery.

Barb, Very sorry to hear about your mother, but won’t be loney up there, Walter will be with her now. Dewey & Ruth Ann

We were sorry to learn of the loss of your Mother. Marge and I would like to offer our sincere sympathy.

Barbara, Marcia and Mark – so very sorry to hear of June’s passing, but very glad we were able to spend time with her at both the reunion in August and at her home after Walter’s death. They were a special couple and we’ll miss them. Love to all.

So very sorry to hear of the loss of your mother. My thoughts and prayers are with you and your families.

We sure will miss Aunt June and her sweet face. There has never been a more kind, thoughtfull and caring person.

Love to all of you,

We are so very sorry for your loss. I know your Mom is at peace now and with your Dad and Tim & Butch in a better place…we will join them when our time comes.

You have tirelessly and lovingly earned your place with the Saints, my Friend. God’s Blessings

Dear Barb, Mark and Marcia: Your parents have been friends,teachers and role models for me and many others of us from Dunkirk Conference Grounds. When we get together we talk about our ‘Summer Parents’ and their influence in our lives. Thanks for including me in your family.

Marcia, so sorry to hear of the loss of your Mother. You and your family are in our thoughts and prayers.

We are so sorry to hear of your loss, but what a wonderful reunion is going on in Haven.

We are very sorry about June’s passing Walter will be there waiting for her. Worked with both and enjoyed them Love and Prayers