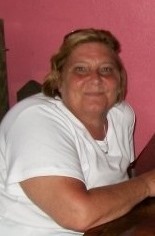 Judith “Beanie” Gunst Roberson, 56, passed away peacefully with her family by her side, Thursday, December 26, 2013.
She was preceded in death by her father, Anthony C, Gunst, Jr, and her brother-in-law, Karl F. Janowski, Jr.
Beanie loved spending time with her family and friends, cooking and was full of love, life and laughter.
Survivors include her daughter, Danielle Simpson; son-in-law, Gregory Simpson, Jr; mother, Geraldine Gunst; sister, Debbie Janowski; brother, Tony Gunst; and nieces and nephews, Erek Karen and Dena Janowski, Anthony and Andrew Gunst.
The family will receive friends from 2-3 pm followed by a memorial service Sunday, December 29, 2013, at Altmeyer Funeral Home, Denbigh Chapel.
Friends are invited to celebrate at Windy Knolls Clubhouse, 712 Windy Way immediately following the service.

I am so sorry to hear about Beany’s passing. I have such fond memories of her and Debby and little Tony, later as little kids together, at the many family picnics we had in Muskegon, or just playing in the yard, going all the way back to your house on Taft St. in GR. Aunt Jerry and Uncle Tony were always great with us and Aunt Jerry was not only my mom’s sister-in-law, but her BFF. Joel was especially proud to have such a pretty aunt.

Now Beanie has left has left the group. There are no right words to say at this very sad and painful time, but maybe these simple words will best describe how I feel; faith and family will help us get through. We because I know that Shelley and Lisa feel the same way, love you guys and we will remember and keep Beany in our hearts forever. Soad also sends her sincerest thoughts and prayers for the Jerry, Debby and Tony and all the children and grandchildren that will be missing their Beanie.

I have such fond memories of Beanie and all the social events she planned for Howmet. Beanie was a master at fun and laughter and I will never forget her or her smile. Beanie will be greatly missed. Until we meet again use those wings to take care of the people you loved.

With deepest sympathy for your loss. You’re in my thoughts and prayers.

My sorrow goes out to all of Beanie’s family especially our daughter Danielle. May God bless you all!

These past few months Beanie lived with us, she touched our heart. We grew so close talking everyday. We obsoletely loved her company. Our prayers go out to all of her family. May god bless you and give you strength.