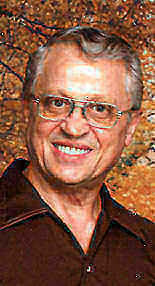 Joe was born November 30, 1921 in Wheeling, a son of the late Michael A. and Josephine Bella-Via Zambito. He was the former owner of Joe’s Barbour Shop, Elm Grove and retired from the West Virginia Department of Highways.

He was a member of St. Vincent de Paul Parish, Elm Grove; the Italian American Club and the Elm Grove Eagles. He was also a U.S Army World War II veteran; a member of American Legion, Post No. 1; the Disabled American Veterans; and was the recipient of 14 war medals.

In addition to his parents, Joe was preceded in death by a son, Joseph A. Zambito; a sister, Rose Chiazza; and three brothers, Charles, Anthony and Angelo Zambito.

He is survived by his daughter, Michaelanne George and her husband, Tom of Triadelphia, W.Va.; a brother, Alfonzo Zambito of Wheeling; a sister, Ann Julian of Washington, Pa.; and several nieces and nephews.

Friends will be received from 2-4 and 6-8 pm, Monday at Altmeyer Funeral Home, Elm Grove Chapel, 154 Kruger Street, Wheeling, where a vigil service will be held at 3:30 pm.

Mass of Christian Burial will be celebrated at 10 am, Tuesday, December 27, 2011 at St. Vincent de Paul Catholic Church, Wheeling, with the Rev. John P. Mulcahy as celebrant. Entombment will be in Mount Calvary Cemetery Chapel Mausoleum, Wheeling.

I’m sorry to hear of your loss. May God comfort you in your time of sorrow. Praying for you and your family. God bless you now and forever.

So sorry to hear about your father.

Please know that you are in our thoughts and prayers during this very difficult time.

My condolences and prayers to the family and friends of Joseph S. Zambito. May your faith give you strength, your memories give you comfort. May GOD’S love give you peace. Thank you for your service to our country. Although you will be missed, you will never be forgotten. God Bless †

My sympathies to a man who had a long and full life and to the entire Zambito family. As a friend of Joe A’s, I always felt welcome at the Zambito house where Mrs. Zambito fed us all too well! The years go by but you never forget those great memories of people and their kindness.

To The Zambito Family:

Please accept our Deepest Sympathies in the loss of Joseph.

He was a member of DAV #117, Bellaire and will be greatly missed

by his fellow members. We were very proud of his Service to our