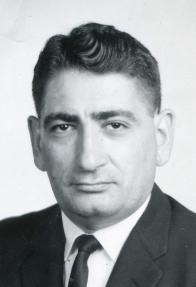 Joseph Giuliani, 85 of Wellsville, Ohio died on Thursday, August 8, 2013 at East Liverpool City Hospital following a brief illness. He was born in Wellsville on June 17, 1928 and was a son of the late Albert and Mary Giuliani Giuliani.

Living his entire life in this area, he was Vice President of Sales for Patterson Foundry from 1951 to 1984 when he became a consultant for Gorman-Rupp in Taccoa, Georgia. Mr. Giuliani was a 1946 graduate of Wellsville High School and a 1951 graduate of the University of Cincinnati where he received his Bachelor of Science in Chemistry. He was a member of Immaculate Conception Catholic Church and Holy Trinity Parish as well as a member of the Sons of Italy and the Knight of Columbus # 507.

His wife, Emma Jean Coleman Giuliani, whom he married on July 19, 1952, survives him at home.

A Mass of Christian Burial will be celebrated at Holy Trinity Parish on Monday, August 12, 2013 at 10:30 AM with Father Charles Crumbley as Celebrant.

The family will be present to receive friends at the Wellsville Chapel of the Martin MacLean Altmeyer Funeral Homes on Sunday, August 11, 2013 from 1-4 PM where the Knights of Columbus service will be held at 3:00 PM.

Following the burial, family and friends will gather at the SOI in Wellsville for food and fellowship.

Emma Jean, Sending you and the family my thoughts, prayers and love. Judy and Bruce

I am very sorry to here of the passing of Mr. Giuliani. I wanted you to know I am think about you Mrs. Giuliani. I have many fond memories spending time with Al at your home.

My prayers and thoughts are with you in the lost of your husband, father and brother. We will miss Joe but we know that he is not suffering any more. See you in September Emma Jean and I’m sorry that I can’t be with you at this time but I love you very much.

Since I can’t be there, I wanted you to know I’m thinking of you. You are in my thoughts and prayers. Love, Anna Mae