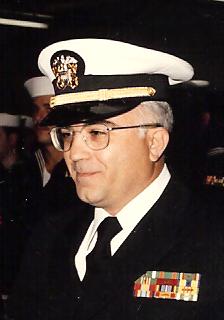 Virginia Beach – Johnnie Lee Steele, 68, passed away Sunday, August 5, 2012. Born in Stuttgart, AR, Johnnie proudly served at Oceana Naval Air Station and retired as a CWO 4 from the US Navy after 30 years of distinguish service. He was the past president of the Pungo VFW Chapter and a member of Charity United Methodist Church.
Johnnie leaves behind to cherish his memory, his wife of 42 years, Connie Steele; his daughter, Jessica Dodd and her husband Gary , and his two brothers, Lawrence Richey and Joseph Frenche.
A Funeral Service will be held at Charity United Methodist Church at 11 a.m. Thursday, August 09, 2012. Altmeyer Funeral Home, Maestas Chapel, is handling the arrangements. Condolences may be offered to the family at altmeyer.com.

Connie and Family, I extend my sympathy to you and your family. Johnnie was such a special person in so many ways, always willing to help others. He will be greatly missed. My heart and prayers go out to each of you. Love Diana

Connie and Family…you have our sincerest condolences. My first meeting w/ Johnnie was when I was coming around the back of George’s house & Johnnie was coming toward the back…I looked up & saw this man w/ the craziest eyebrows!! Holding a plate of home made rolls for Mimi…I immediately liked him. He was quite a character and again I say, I’m honored to have met him…& appreciative still for what he did for Mimi & myself. Anything you may need, Henry & I will jump at the chance to do anything you want.

dear connie i am so glad that i knew Johnnie, what a man. i am sorry for your lost….

i love you connie

I was in high school with Johnny and remember him well. I am so sorry for your loss and to know that he is gone at such a young age. God bless you and your family.

Jonnie Lee and I grew up on the Pine Bluff Arsenal. I have fond memories of our play together and when my dad bought the first TV on the block we would all watch Howdy Doody together along with the test pattern. After we graduated I lost contact with him but was so glad to see him at our 50th Class Reunion.

I am so sorry to hear of the family’s loss and wanted you to know it is a loss to all of us who grew up with him. He will always be a part of my youth for which I have fond memories.