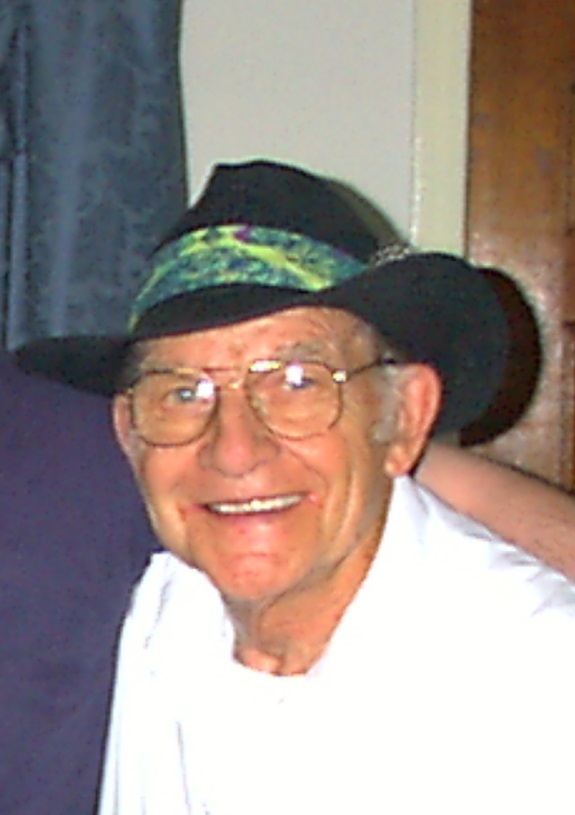 Born December 26, 1923, passed away February 27, 2014. He was a native of Virginia Beach, had worked for and retired from Colonial Stores and Big Star Supermarkets as a meat cutter. After his retirement, he went on to work for the Green Grocer in Ghent as a meat cutter. Mr. Hopkins was an entertainer and was loved by many. He was known as the singing security guard at TCC, Norfolk campus. Family and friends knew him as “Pop”.

Family and friends will hold a Celebration of Life Ceremony at a later date. In lieu of flowers, donations may be made to www.littlekidsrock.org to give children the opportunity to learn and play music. Pop was all about music. We love and miss you Pop.

“Music was his life, it was not his livelihood, and it made him feel so happy and it made him feel so good and he sang from his heart and he sang from his soul, he did not know how well he sang, it just made him whole.” Johnny Hopkins could play guitar like Chet Atkins and croon like Bing Crosby. The day I heard of his passing, I got this song stuck in my head that Johnny sang once, “I Like Beer”. All day long, “I like beer, it makes me a jolly good fellow”.

“And ye now therefore have sorrow: but I will see you again,

and your heart shall rejoice, and your joy no man taketh from you.” John 16:22

Both Susan and I were saddened to hear of your Dad’s passing. Please accept our deepest condolences and know that you are in our thoughts and prayers. As a spiritual gift to your family, we will have a Votive Candle lit in his memory at Saint John the Apostle Catholic Church in Virginia Beach. There is no doubt that your Dad, Francis Albert and Jimmy Dorsey are working their musical magic for the angels! With love and God’s blessing to you all.

Eternal rest grant unto him, O Lord, and let perpetual light shine upon him. May the souls of the faithful departed, through the mercy of God, rest in peace. Amen. Our deepest condolences from Our Lady of the Rosary, Legion of Mary-St.. Gregory the Great Catholic Church. Mr. John we will miss your angelic voice and sweet smile.

I am so sorry for your loss. I will always remember Pop and your mom. They were both good to me and always welcomed me into their home.

Our deepest condolences to all the Hopkins family. I have so many fond memories of hearing you play your music together. Each with your own special gifts to offer made one heck of a group! The memories will live on in my mind long after. Kenny and I are saddened by the news of your dad’s passing. And, we both send our love

So sorry to read about the loss of your loved one. I thought about Psalms 90:10. May knowing God cares for you bring you comfort during this difficult time.

So very sorry for your loss. Our thoughts and prayers are with the family. Pop will surely be missed. Now he can play his music in heaven!

I am SO sorry to hear of Pop’s passing. Oh the fun we had doing karaoke together! It was such an honor to have known your Dad! He LOVED singing & making music, that thrilled him to no end & boy could he sing! I can still hear him now… He has left a LOT of people with some great memories & I can say I am blessed to be one of them. Surely there’s a celebration in Heaven. May GOD grant you all Peace during this difficult time as you prepare to say “So Long” & may you find comfort in knowing you will see him again. Sincerely, Karen Kippy & Jimmy Adams

I just read about Pop’s passing in today’s paper as I was doing laundry. I remember and enjoyed playing music with you and him. I never expressed this while he was with us, but I considered him a surrogate father after my dad passed in 1982 32 years already!?. Please send me information on a memorial service to my GMail address “michaelfm8@gmail.com”. It would be great to see you guys again, even though it’s under these circumstances. He’s with your mom again, and you’ll see them both again when the time comes.

Was sure sorry to see that John passed away. He used to work at Southern Packing and we called him the singing meat cutter. I went to hear him sing at least times at two different places. He could really sing well. May God be with your family at this difficult time.

We are so sorry to hear about your dad,sending our love and prayers.

We may have not known “Pop” personally, but one can surely tell that he is treasured by family and his grandchildren. Our sincere condolencess to both Steven and the family for your loss. May his light be with you each forever.