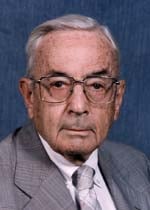 WATERHOUSE, John “Jack”, 98, of Wheeling died Monday July 20, 2009 at Heartland Lansing Nursing Home.
He was born April 7, 1911 in Wheeling, son of the late Frank and Mary Grubb Waterhouse, and was a life long resident of Wheeling. He was the owner of the North Park Development Corporation, and was a life long member of St. Matthews Episcopal Church in Wheeling, where he served for 25 years on vestry, and a senior warden for a number of years.
He spent most of his business life in the field of housing. He was the manager of the Knickerbocker Village in New York City in the 1930’s. He also studied architecture under Franzheim & Franzheim. He was the housing supervisor of War Housing in 13 West Coast states from 1941-1945. He was the president of the Interstate Construction Co. and a licensed real estate broker since 1947. He served as director and vice chairman of the Sandcrest Foundation since 1953. He was the former chairman of the Wheeling- Ohio County Planning Commission.
Jack was the advisor, appraiser, and inspector of the Federal Housing Administration and a member of local, state, and national Pittsburgh Home Builders Association. He was a member of the land development and state building code committees. He was the former chairman of the WV Housing Development Fund for seven years, serving Governors Moore and Rockefeller. He was the former director of OVI & BD Corporation, and former member and vice president of the Wheeling Real Estate Board. He was director of the Wheeling Area Chamber of Commerce since 1970, serving as president in 1971 and 1972. He was a member of the Wheeling Hall of Fame Board and elected director of the OVMC Foundation. He served on the board of directors and the land and development committee of the National Association of Home Builders. He also received a Life Magazine and National Association of Home Builders Award of residential subdivision in 1961 for the Elm Terrace subdivision design, and was selected citizen of the month in 1965.
In addition to his parents, he was preceded in death by his wife, Rita Fraser Waterhouse, and his three brothers, Frank D. Waterhouse, Louis G. Waterhouse, and Admiral Jacob W. Waterhouse.
He is survived by his two sons, John F. Waterhouse of Wheeling, and Bruce A. Waterhouse of Wheeling; one daughter, Mary Beth Chiazza of Wheeling; one sister, Elizabeth Stifel Miner of Wheeling; eight grandchildren; nineteen great grandchildren; three great- great grandchildren; and four nieces and nephews.
Private services will be held at the convenience of the family.
Memorial contributions can be made to St. Matthew’s Episcopal Church, 1410 Chapline St
Wheeling, WV 26003; The Oglebay Maintenance Fund, Route 88 North, Wheeling, WV 26003; and America’s Future Trees Foundation, Oglebay Park, Route 88 North, Wheeling, WV 26003.
Arrangements are entrusted to Altmeyer Funeral Homes. Online condolences may be offered to the family at altmeyer.com

Dear Mary Beth and Family, We just want to take time to send our sympathies to you and your family…What wonderful person your father .May Jesus bring you comfort.. Love and Prayers, Ron and Candy Wilson

We send our condolences to all the Waterhouse family. Our thoughts and prayers are with all of you during this very sad time.