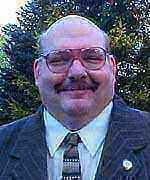 TAGG, John Harold, 51, of Wheeling, W.Va., was born into eternal life on September 15, 2009, while serving the citizens of Ohio County.

John was born on February 28, 1958 in Moundsville, W.Va., the son of the late Anna Gatewood Tagg and Harold Tagg; and brother of the late Harold Tagg, Jr.

John is survived by his brother, Kenneth Tagg and his wife, Betsy; and his sister, Sharon Mayfield. He also leaves behind his soul-mate and wife of 18 years, Kathy Tagg Gorney; his mother-in-law, Mary Margaret Gorney; and many close nieces and nephews.

John will be missed by his many friends and co-workers, especially his lifelong friend, E.M.A. assistant director, Lou Vargo.

John was a devoted animal lover, especially for his Great Dane, Cody. He loved all of West Virginia and passionately and selflessly served the people of the state, for whom he felt great compassion and responsibility.

John served as an EMT-Paramedic, an animal control officer and as the director of the Wheeling-Ohio County Emergency Management Agency, since 1994. He creatively taught classes in EMT and paramedic technology, rescue, fire service, hazardous materials, terrorism and health issues. He not only taught locally, but on a state and national level.

John was a certified emergency manager, having served as the head of the Ohio County Hazardous Materials Response Team, the flood plain administrator and former president and vice-president of the W.V. Emergency Management Council. Under his leadership, Ohio County was certified “Storm Ready” by the National Weather Service.

John treasured his Catholic faith and his profession as a Secular Franciscan in the St. Alphonsus Fraternity, who will miss his spiritual insights and heartfelt prayers. He was a compassionate, generous and loving man who will be deeply missed. He lived by the motto, “Look on the bright side”.

There will be no visitation. The family will receive friends from 12 Noon until the time of the Mass of Christian Burial at 1 pm, Saturday, September, 19, 2009 at Corpus Christi Catholic Church, with the Rev. Eric Gauchat, O.F.M. Cap., as celebrant. Interment will be private.

In lieu of flowers, the family suggests that memorial contributions be made to the Secular Franciscan Order, St. Alphonsus Fraternity, 157 Franciscan Drive, Wheeling, WV 26003.

I knew John when I was in college many years ago; he was a Tech in EMSTAR and I worked in patient registration…I always enjoyed his humor and knew he was committed to his profession. My most favorite memory was when you were getting married, he told all of us about how you had your wedding band engraved with something special and although I don’t remember the details, it was quite obvious how special you were to him. I have not seen him in years, but wanted to send thoughts your way.

It was of such sadness to hear of the passing of John. Having the chance to meet and attend several meetings and training sessions throughout the State with John were always enjoyable and informative.

May God bless you and the family and give you strength in this time of grief.

I remember John from some years ago and what a great guy he was. We met early in the 80’s as my EMS career began. We crossed paths in many places over the years. He was never too busy to answer a question,help with a problem or just stop and talk. I know he will be missed. Blessings and condolences to those he left behind. Ed

I worked with John at the Ohio County Animal Shelter in 1999. He was the first person to befriend me as a new employee there, and I so appreciated his friendship and his willingness to help me at work. I remember how he always spoke so lovingly of his wife and his beloved dogs. Kathy, you have my deepest sympathy. You and the rest of John’s family are in my thoughts and prayers.

John was such a devoted friend and one of the smartest men I ever knew. He loved his family and children held a special place in his heart. John did good things for this county that no one even knew. Spent long hours on Haz-Mat calls and at meetings. His sense of humor was great. He will be missed. I pray his family can somehow find peace in the knowledge that He is with you in spirit. I am sorry that words seem weak right now.

Kathy and family, thank you for sharing John with our Emergency Services community. John and I became friends 13 years ago August, 1995. He helped to guide me, a newbie in this profession, his friendship never waivered. Thank you for his gifts to us. Our prayers our with you and John’s family. “A big man at heart, a giant in his service and love for West Virginia”.

Kathy and Johns Family. I’m sorry for your loss. John was one of the greatest men i have ever meet. John was so insightful and helpful with my career in Emergency Management. You loss is felt my all in our community. If you need anything feel free to ask any member of our Emergency Management Community.

No words can adequately express sympathy for your sudden loss. From his EMSTAR days to his most recent position in EMS, he cheerfully served many people. May the love of family and friends be a source of comfort to you in the coming days. You will be in my prayers.

What a shock it was for me and, I’m sure, everyone else to hear that John had suddenly passed away. It’s been a long time since John and I have been in contact but I’ll never forget all the good times we all had as EMS providers back in the 80’s and 90’s. It saddens me to know John will not be here with us any longer. Please know you will be in my prayers and that I lit a candle in church for John the day of his funeral. Take care and God bless Kathy.

I was so shocked to hear of John’s passing. I have many memories of him as far back as the 80’s. I also remember when the two of you were married and how much he loved you. I just lost my Dad in July, so this is so real to me. I can say that I know how it feels to lose a loved one. My thoughts have been with you and I am very sorry for your loss…

I am so sorry for your loss, I considered John a friend and I will miss him. We will keep you in our prayers. If we can be of help in any way don’t hesitate to ask.

Kathy, So sorry to hear of John’s untimely death. He taught both my EMT and Paramedic classes. John was a class act and it showed in everything he did.

Kathy, Mimi and family we are so sorry to hear that John has left us all.We share his loss with you and are going to miss him so much. May God grant him peace.John we all love you. Gil Peg Cathy Scott Damien n Zander

I am very sorry for your loss. You and your family will be in my prayers during this difficult time.

My prayers and thoughts are with you and your family!!! he will be missed dearly.

Our sincere condolences to your entire family. John was a devoted servant to the community and a fine person, he will be sorely missed, by many people.

Our thoughts and prayers go out to Johns family. From Wetzel County E911 and OEM.

I recently came to know John in the family of EM. I am a new EM and he helped me tremendously, giving me insight and encouragement. Know that John will be missed by all that knew him for years or just a short time. Comfort, Prayers, and Blessings are sent your way.

To the Tagg Family: You have my sincere condolences. May all the happy memories you shared with John, help you find calmness and peace in this very difficult time. I knew John through the Area Maritime Security Committee in Pittsburgh, where he was always willing to help in anyway. He will be missed by the entire committee.

We are sorry for your lost.John was a friend who made a diffrence in our life.We will miss him.Our prayers are with you KATHY,BESTY,KENNY and MACK

With deepest sympathy to his family and close friends, I worked with John during my employment with the Wheeling-Ohio County Health Department. He was a ray of sunshine whenever I saw him. He will be remembered.