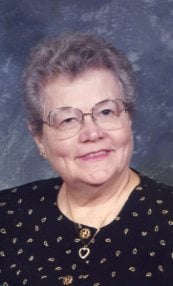 JoAnne Brookes Birch, age 77, of East Liverpool went to be with her husband, Robert, on Saturday, October 15, 2011 after a brief illness.

She was born on May 18, 1934, and was the daughter of the late Charles R. and Elsa Shurte Brookes.

Living her entire life in East Liverpool, she had co-owned and operated the former Birch Supply Company with her husband, Bob, for 46 years.

A graduate of East Liverpool High School class of 1952, she was active in class meetings and Alumni planning. Mrs. Birch served on the first board of the Alumni Association, was a member of the Tower Builders and the Alumni Band. She was a member of the East Liverpool Quota Club and the Social Order of the Beauceants. A lifetime member of the former Calvary United Methodist Church which became Good Shepherd United Methodist Church, she sang in the choir, played in the bell choir and was a former board member and trustee of the church board.

Services will be held at the Calcutta Chapel of the Martin MacLean Altmeyer Funeral Homes at 11:00 AM on Wednesday, October 19, 2011, with Pastor Richard Smith of the church officiating. Burial will follow in the Riverview Cemetery.

Friends may call on Tuesday at the Calcutta funeral home where the family will be present from 2 to 4 and 6 to 8 PM. Following services on Wednesday, family and friends will gather at the Martin MacLean Altmeyer Hospitality Center for food and fellowship.

Memorial contributions may be made to either the East Liverpool Alumni Assoc. or the Good Shepherd church.

So sorry to hear of your mothers passing.Take comfort in the fact she is free of pain ,suffering and worry and is reunited with the love of her life ,your father Bob.Prayers are going out for the family .Lynne & family

We are so sorry to hear about your Mom. They are always taken from us way to soon. We wish we could there with you, but please know that you are in our prayers.

I am so sorry to hear of the loss of your Mom. I can’t even imagine how heavy your heart must be. May your faith help you through this very difficult time and may you hold your memories close to your heart.

Condolences to the Family of JoAnne Brookes Birch.

Dear Birch Family, please know our deepest condolences and prayers are with you during this most difficult of times. I didn’t know JoAnne all that well, but the few times I was invited to her home she treated me with the utmost respect and kindness. She was respected and loved by all us kids, and she will be missed but not forgotten. Sincerely, the Cook family.

My caring thoughts & prayers are with you especially at this difficult time.

Dear Cindy, Steve and family, please accept my sincerest sympathies at hearing the news of your mother’s passing. I have many fond memories of great dinner gatherings and spirited Steeler parties with family and friends. JoAnne’s warm demeanor and easy going style always ensured that everyone felt welcome in her home. My thoughts and prayers are with you at this time. God Bless…

Dear Cindy, Steve and Family, Thinking about your mom, I remember all the parties at the Birch home in high school. Your mom was such a support in all the school activities. I know she will be greatly missed. Please accept my sincere condolences.

I am deeply saddened to learn of the passing of JoAnne. She was a warm and vibrant person whom I enjoyed. I feel that East Liverpool has lost one of its best assets.

My deepest sympathy to Steve, Cindy and their family.

So sorry to hear about Joanne passing away, she was a very nice person and we will miss her.

STELLA AND I SEND YOU OUR CONDOLENCES AND PRAYERS. STELLA SPECIALY REMEMBERS TIMES IN THE CLASSROOM WITH BOB AND JOANNE.OUR THOUGHTS ARE WITH ALL THE BIRCH FAMILY

Sorry about the loss of your mother. She was a good person and is missed by many in the East Liverpool area.

My prayers are with you both and your family as your heart heals.

God bless you both and your family.

God be with you for ever and ever.

We are so sorry Joanne is gone too soon, but will never be forgotten. Wish we could be there but your family is in our thoughts and prayers.

You have my Condolences and my Sympathy.