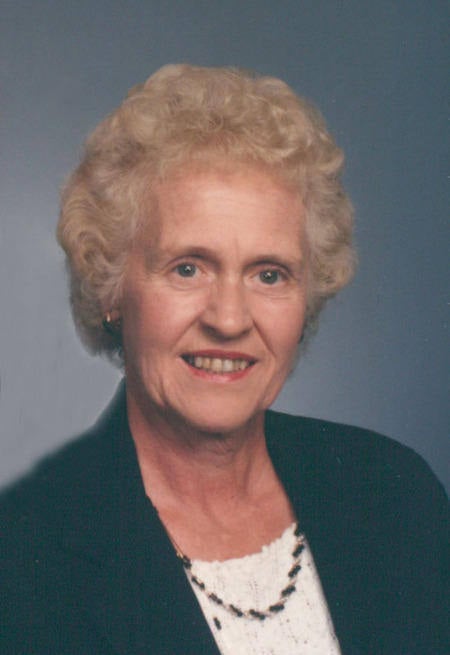 She was born December 10, 1927 in Bellaire, Ohio a daughter of the late Cecil and Georgia McConnell Robinson.

In addition to her parents, she was preceded in death by her sister, Hilda Marie Schleicher.

Family and friends will be received at the Bauknecht-Altmeyer Funeral Homes & Crematory 441 37th Street Bellaire, Ohio on Saturday from 6 to 8 pm, Sunday from 12 Noon to 4 pm and Monday from 10 am until time of services at 1 pm with Rev. Sheryl Seitz and Pastor David Mills officiating. Interment in the Holly Memorial Gardens in Pleasant Grove, Ohio.

Memorial contributions may be made to the First United Methodist Church 3402 Guernsey Street Bellaire, Ohio 43906.

Share your thoughts and memories with Jessie’s family at altmeyer.com.

Dearest JoAnne and Gary: I loved your whole family and your mom was a dear and special lady with such class and beauty. They do not “make them like her anymore” and we can be so very proud of how our parents raised us to be. I know you have lived up to the expectations and the legacy she had for you Jo. She is in the arms of the angels and all who loved her…one day we will all be together again and live in comfort knowing that when it is our time, they will “all” be there with open arms to welcome us. Prayers always!

I have known Jessie for many years. I knew her when they had Frys Store and from the FUMC. She was a wonderful lady and always had a beautiful smile on her face. It was a pleasure to have known her and I am sending prayers of peace and love to the entire family.

Jo Ann, Prayers for you and your family. Your mom was a great lady. My thoughts are with you at this terrible time.

JoAnn – I was sorry to read that your Mom passed away. Always remember her smiling . . . Thinking of you during this very difficult time. Sincerely,

Joann, I am so sorry for the lose of your mother. My thoghts and prayers go out to you and your family.

Jojo, Ted, et al…When I sort through my childhood memory banks…..there are few that do not include Jessie Lou & Ted. Your home was my home away from home. I will cherish those memories always… Love you, Linda xo

My condolences to Ted and his family. Jessie was a wonderful person, kind, loving and supportive to everyone she touched. I will always remember her as a Special Friend.

Our prayers go out to you and your family, A loss like this is hard to accept. She was a great lady.

Psalm 116:15 Precious in the sight of the LORD is the death of his saints.

So sorry for your loss. My thought and prayers are with you.

Both Jane and I send our heartfelt wishes. Your family and mine have been like one big family thru the years. I look back and remember all the great times we had. Prayers to all…

Words can not express the sorrow we feel for you and your families. Jess was a very special person to many people and will be remembered for her kind ways. Hold tight to all of your memories and know that you were loved by a wonderful woman. Our prayers are with you at this time of loss and God Bless all of you.

To Ted, JoAnn, Gary and Family,

I was saddened to learn about the passing of Jessie Lou. Growing up seeing her smile and always appreciating her kindness to me left a wonderful memory of a wonderful lady. She will be missed by you but the loving memories will be there to ease the sadness. God Bless. Bob Ney, Newark, Ohio