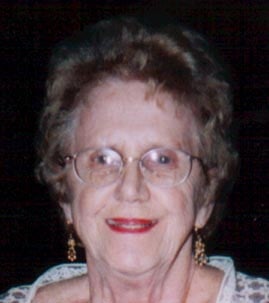 LaFLAM, Jean L. Hickey 72, of North Wabash Street, Wheeling, died Saturday January 3, 2004 in Wheeling Hospital.
Jean was born February 17, 1931 in Wheeling, a daughter of the late Ralph A. and Mary "Angela" Miller Hickey.
She was a homemaker and a member of St. Joseph Cathedral and the former Blessed Trinity Catholic Church, Wheeling.
In addition to her parents, she was preceded in death by her husband, Leo W. LaFlam in 1997.
Surviving are two daughters, Christy Klug and her husband Mark of Moundsville and Sally Miller and her husband Lance of Wheeling; a brother, Jack E. Hickey of Pharr, TX; two sisters, Margie Hickey and Nancy L. Butts, both of Benwood; five grandchildren, Marla Payne and her husband Brian of St. Clairsville, OH, Lance Miller Jr. and his wife Shaenan of Wheeling, Julie Klug of Moundsville and Leah and Mindy Miller of Wheeling; and several nieces and nephews. Jean was a loving and devoted wife, mother and grandmother.
Friends will be received from 1 to 8 pm Tuesday at Altmeyer Funeral Home, 1400 Eoff Street, Wheeling, where a vigil service will be held at 7:30 pm.
Funeral Liturgy with Mass will be celebrated at 12:05 pm on Wednesday, January 7, 2004 at St. Joseph Cathedral, Wheeling, with the Rev. Larry Dorsch as celebrant. Entombment in Mt. Calvary Cemetery Mausoleum, Wheeling.
The family suggests that memorial contributions be made to St. Joseph Cathedral, Wheeling.

I am very sorry for your loss. I know recently what it’s like to lose a parent. My cherished memories have been a great help. May God bless you and your family,