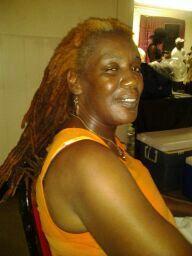 NORFOLK- Jean Elizabeth Wilder, 54 passed away August 7, 2013. She is the daughter of the late James and Delores Powell. Besides her parents she preceded in death by her brother Bernard Wilder.
She is survived by her loving children, Katrice Wilder, Antonio Watts, Keisha Griffin, David Wilder, Marcus Riddick, Ricky Riddick, Leeza Holly and Regina Holly; siblings, Ruby Powell, Angela Williams, David Wilder, Donelle Powell, Laurie Powell, James Wilder, Josie Hawkins and 6 grandchildren.
A memorial service will be held at a later date. Memorial contributions may be made to the Cancer Society. Online condolences may be offered at www.Altmeyer.com

Also I like to say to my Aunt Joise keep yo head..thank you for introducing and sharing your bestfriend with me.blessings be with you.

Jean, There is not a day that pass that I dont miss you! Sleep on and rest from all the pain you had to endure through your illness. May God open his arms wide to accept you in his kingdom!!! love Josie

R.I.P mom , you will always be missed : love you

Yo this woman I meet 3yrs ago made such a big impact in my life. I am truly blessed to had known her. Jean accepted me for who I am.She treated just as a child of hers with words of encouragement,advice and we all know how tha words would come out. To all tha children and family of Jean my heart and prayers are with. You have a brother/friend here..blessings be with you.