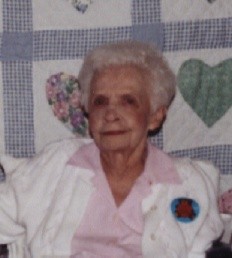 KALTENBACH, Elizabeth Jane, 83, of Wheeling, W.Va., died Saturday June 5, 2004 in the Good Shepherd Nursing Home.
Jane was born in Wheeling on December 23, 1920, the daughter of the late Charles J. and Martha Derry Kaltenbach.
In addition to her parents, Jane was preceded in death by an uncle, David J. Derry.
She retired as a secretary with the Ohio Valley Medical Center, Wheeling and a Protestant.
Jane is survived by her cousin, Elizabeth Derry of Rochester, New York.
Friends will be received Tuesday from 1:00-4:00 pm at the McCoy – Altmeyer Funeral Home, 44 15th Street, Wheeling, W.Va., where services will be held on Tuesday at 4:00 pm with the Rev. Jay McMillen officiating.