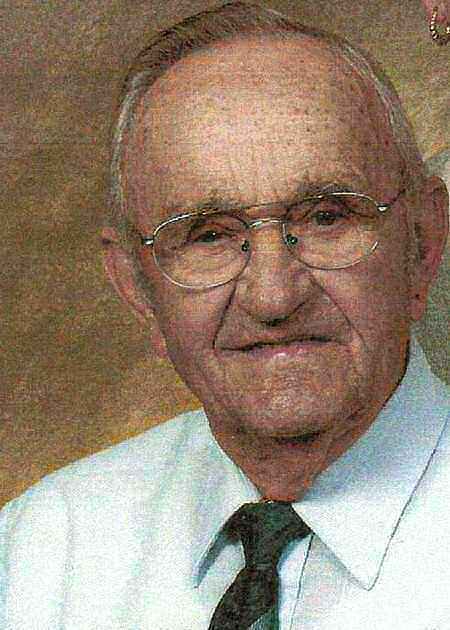 Norfolk- James F. Griffin, 94, went to be with the Lord Wednesday December 14, 2011.
He was born February 15, 1917 in North Carolina to the late William and Doner Griffin and has been a resident of Norfolk for over 60 years.

He was preceded in death by his beloved wife Frances V. Griffin on May 17th of this year.

Mr. Griffin was a very active member of Miles Memorial United Methodist Church in Norfolk and NARTU Norfolk association. He proudly served in the U.S. Navy, serving during W.W. II and retired as a Master Chief in 1975. He also retired as an aircraft inspector from NARF, Norfolk.

A funeral service will be conducted Saturday at 12pm December 17, 2011with Rev. John B. Haynes officiating. Interment will follow at Woodlawn Memorial Gardens.
The family will receive friends 6-8 pm Friday, December 16, 2011 at Altmeyer Funeral Home, 5792 Greenwich Road, Virginia Beach, Virginia. Condolences may be expressed to the family at altmeyer.com

Grandpa oh how I love you and miss you already, You are the reason for who I am today and I am blessed to have had you in my life, you molded me and helped raise me. You will FOREVER be in my heart. You are the most amazing man and always did good thing with your life, I bet your up there in heaven dancing with grandma in front of Jesus right now and that gives me peace! I will not say goodbye but Hey I will see you later. I LOVE YOU!!!

I am so very sorry for your lose.I hope you find peace in knowing that he is with his Lord and his Wife and is finally no longer in pain.God Bless all of you.

My dear Uncle Frank will always be in my memories of one great man! When we lived in Norfolk during my childhood, we visited him often and he always reached out to my sister and I through his love and kindness! The whole Griffin family will always hold a special place in my heart, and Uncle Frank outlived them all! You will be missed, but you will be in our hearts forever.

Our thoughts and prayers are with you all during this difficult time.

Praying for all of you during this time of parting from your dear granddaddy. He is rejoicing with his dear wife and dancing before the Lord today! Love you Marion and family.

Uncle Frank was one of the first uncles in my childhood memories because I lived in Norfolk, and most of my relatives were in NC. He was always such a kind, gentle man yet so strong, especially when faced with adversity. After my father Frank’s brother passed away

I really enjoyed listening to Uncle Frank’s soothing voice. He sounded just like my father, and I felt closer to him. Now, they’re in Heaven together! I will always immensely love my Uncle Frank!! My condolences to his children, grandchildren and great-grandchildren.

Uncle Frank was such a special uncle to me. I have so many great childhood memories of our Virginia trips and visits with our “Griffin” family. We will miss him so much. Our prayers are with the family during this time of loss.

We are very sorry to hear of your loss. Our thoughts are with you and your family.

you were my best friend I miss you so much. i love you granddaddy<3