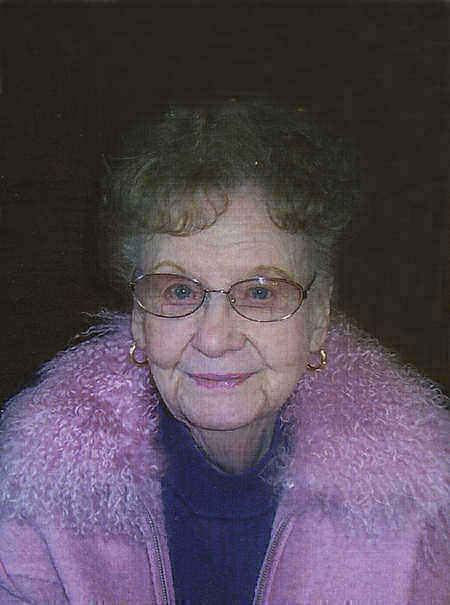 She was born May 6, 1919 in Clarington, Ohio, a daughter of the late Charles and Bertha Cook.

She was a world traveler, having visited many foreign countries. An accomplished musician, she loved entertaining by playing the organ and piano.

She was a member of the 1937 graduating class of Salem High School, Clarington, Ohio.

In addition to her parents she was preceded in death by her husband Leonard Jennewein, and her grandson, David Bartimus, three sisters, Dorothy Cook, Evelyn Clark and Mildred Harman.

Family and friends will be received at the Bauknecht-Altmeyer Funeral Home and Crematory 186 Main Street Powhatan Point, Ohio Sunday August 5 from 7-9 PM and Monday August 6 from 2-4 & 6-8 PM where services will be held Tuesday August 7, 2012 at 11 AM.

Interment in the Powhatan Cemetery.

Memorial contributions may be made to: Powhatan Fire Department.

I’m very sorry for your loss. Ireta was a kind and gracious lady. I’ve had her on my mind a lot lately. She was a cousin to both my mom and my dad. I’m thankful for the time we spent together sharing stories about our parents and grandparents. She will be missed. God bless.

I have wonderful memories of Ireta and Evelyn, visiting my grandmother, Jennie Hassig Mullett while I was growing up! Both ladies were full of joy and fun to be with.

Iretas kindness, musical talent and warm loving smile will last for generations to come. She was a very dear friend and will be missed. We loved her and will miss her very much. Her music will be in our hearts for all eternity.

just wanted to let you know how sorry we were to hear about ireta’s death. i worked with her and leonard at the A&P in powhatan point in the 70’s. we wondered about her this year when we didn’t receive her xmas card. we always enjoyed hearing her news. she was a special lady. bob and pam

On behalf of myself and my wife, Pat, my sister Nancy Pyles, and brothers and spouses Thomas and Jeanne Mullett and David and Sandra Mullett, children of Jess and Mary Mullett we want to extend our condolences and smypathy to the family and friends of Ireta. In recent years we have had few occasions to enjoy Ireta at the Mullett family reunions, but we have been left with many fond memories of her. Several times we received unexpected singing “Happy Birthday” greetings from her. Ireta made the world a better place and she will be missed by all. Sincerely, the Mullett family.

We are sorry to hear about the lost of your Mother, she was a real good friend. Our Birthday was a day a part. We will miss her and we love her. Your family is in our prayers.

I am so very sorry to hear of your mother’s passing. You have my deepest sympathy and prayers. May she rest in peace. Eternal rest grant unto her O Lord, and may the perpetual light shine upon her.

Sarah,Our deepest sympathy. We loved your Mom a wonderful person. So many good times. God Bless.

Sarah…Our deepest sympathy in the passing of your wonderful Mother..She was truly a good friend to all who met her..we had so many good times at Voshels many laughs too..may God be with you and yours through this difficult time..Blessings to All.

I always enjoyed visiting with Ireta…such a wonderful sense of humor…laughed a lot with her…and so much enjoyed listening to her play the organ. Praying for you as you trust in the resurrection power of our Lord Jesus Christ.