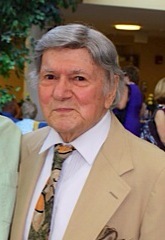 Born in Newark, N.J. on February 1, 1923, he was the son of the late Achille and Italia Andreini. He was a self-employed furniture refinisher, until his retirement in 1985. He was also an Army veteran of World War II, having served in Italy, were he was awarded the Purple Heart and Bronze Star.

In addition to his parents, Mr. Andreini was preceded death by his wife, Irene B. Andrieni, in 2011; two sisters, Mary and Odelia; and two brothers, Adelfio and Aldo.

With respect to his wishes, there will be no funeral services for Mr. Andreini. His children would like to thank all of their family and friends for their love and prayers. Arrangements by Altmeyer Funeral Home, 1400 Eoff Street, Wheeling, W.Va.

I was so sorry to hear about your dad’s passing. Mr. and Mrs. Andreini both held a very dear spot in my heart and they will both be sadly missed. My prayers go out to all of your families. Sincerely, The Gibson Family, Diana, Bob and Robby,

Dear Derek,Hugo and family,So very sorry to learn of your Father’s passing. I know all too well what it feels like to lose both parents so I pray that God wraps you in His loving arms and brings you peace. Fondly, Missy Nuzum Forte

We are so very sorry for your loss; Uncle Hugo was not only the life of any party, but he was so full of love for his family. I will cherish our visits together and never forget how he seemed as interested in my little ones as if they were his own grandchildren! He was a wonderful man- any would be lucky to know him, and very few others lucky to have him as family! He was so proud of you both and of Nicole and Hugo, and every one of their endeavors and accomplishments; he loved you all so much. You were always there for him too. He will be so very missed. We love you all too, so very much. Hugs and kisses and prayers for your peace and comfort in knowing the love you have shared with him meant so much!

We share your sorrow at the loss of Uncle Hugo. We will all miss his constant smile and laughter. You were a wonderful, caring son and he was so very proud of you, Hugo. He loved you and Laura so much.

Dr. Hugo Andreini: I am very sorry to hear of your father’s death. As a patient of yours in the past, I always thought you were so pleasant and very nice, which is a reflection on your parents. God Bless you and your family at this time.

Hugo,Derek and families: Alia and I were very sorry to hear of Hugo Sr. passing. He was a very good and fun loving man, always with a ready smile and a quip. I enjoyed my time playing poker with him and hearing his stories. With sincere sympathy.

I send you my most heartfelt condolences! My thoughts and prayers are with all of you. May happy memories remain with you always. Much Love, Cindy Niven

May the love of God surround you and your family during this difficult time May you come to know that the love of God is with you always, may your memories of Hugo Joseph Andreini, give you peace, comfort and strength…

So very sorry for your loss.I will keep him, and you, in my prayers.

Sorry to hear about your Dad. Hope you’re all doing as well as possible. Dean

Uncle Hugo you are Missed!

we are so sorry to hear about your dad, he was such a wonderful man and a great friend to my parents Jack and Joanie Long when they lived up Washington Farms ..my dad JACKsaid to tell you he sends his best and says he will keep you all in his prayers and our family will do the same ..and you will be in our thoughts and prayers in the days ahead as you deal with such a great loss

We were very sorry to hear of the passing of Hugo. He and his wife were

an important part of our neighborhood

in Clinton Hills and they will be missed. I will never forget those days

when he was riding on his lawn tractor

and singing to himself. He enjoyed those moments and he seemed to enjoy life. Please accept our condolences.