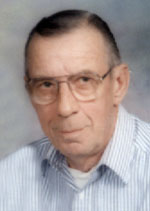 He was born September 16, 1932 in Wheeling, a son of the late Fred and Ella Shutler Fox.

He was a former employee of Allied Chemical, Johnson Boiler Works and Banner Fiberboard Co, a member of Our Lady of Peace Catholic Church and an Army veteran of the Korean War.

In addition to his parents, he is preceded in death by a daughter, Lesli Ann Fox, a sister and brother in law, Nancy and Jerry Balgo, a nephew, Timothy Balgo, DDS.

Mass of Christian Burial will be celebrated at 11:00 a.m. Friday, October 21, 2011 at Our Lady of Peace Catholic Church, Wheeling, with Rev Dennis Schuelkens as celebrant.

Sorry to hear of the loss of your father. Our thoughts and prayers are with you and your family in your time of sorrow.

Your husband & Dad was a treasure! He was so funny and kind with great stories. I especially remember him with his horse telling me all about them.

I can only imagine how much you miss him. I am thinking of you.

I am so sorry to hear about your Dad. I just came across the notice today. My thoughts and prayers are with all of you and if there is anything I can do, please let me know. Please give your Mom my sympathy.

Saw Howard’s obit on the website and just wanted to convey my deepest sympathy to your family.

You are in my thoughts and prayers.

Naomi Dickerson, a co-worker and friend from Hazel-Atlas Glass Co.

Howard was a very special man who has given us all wonderful memories to cherrish he may have left this earth but he will never be forgotten I remember when I was a little girl and I tricked him into buying my last girlscout calender I believe you all ended up with 5 of them but I gave him some sob story that no one would by them so he bought 4 to make me feel better and Joan had already got one then I yelled to Katie that I had sold my last one and he laughed really hard with me instead of being mad.lol Oh and how he use to tell us kids he had a green ear cause Joan yelled so much that his ears turned green and then he couldn’t hear and as young as I was I believed him.. Howard was a good friend to all who met him god bless you all in your time of sorrow and remember he lives again without pain in the house of our lord.

our love to all of you

Please accept our deepest wishes of sympathy. We thought of your dad as extended family. He will be missed.

but the memories live on forever.

Lynn, I’m so sorry I wasn’t there for you…it seems you were always sent to me at the hospital when I needed to see a friend’s face…Please know that you and your family are in my thoughts and prayers.

We are so sorry to hear about your Dad. Know that we are lifting your family up in prayer as you go through this difficult time.

My thoughts and prayers are with you, and your family, at this time of sorrow. May God comfort you.

Our deepest sympathy, our thoughts and prayers are with you