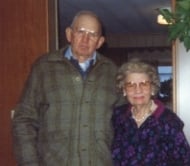 Helen T. Pisarsky, 101 of Hammondsville, OH peacefully went to sleep with her Lord on Tuesday, September 17, 2013 at East Liverpool City Hospital following a brief illness. She was born in New Cumberland, WV on January 16, 1912 and was a daughter of the late Julius and Rose Kucharcyk Latynski.

Living her entire life in the area, Mrs. Pisarsky was a home maker. She was a member of the St. Patricks Catholic Church in Salineville, OH.

Surviving is a son, Edward Pisarsky of Hammondsville, OH and several nieces and nephews. She was a loving wife, mother and aunt. Mrs. Pisarsky was loved by all who met her and will be greatly missed.

Along with her parents and husband she was preceded in death by 3 brothers, Frank Latynski, Julius Latynski and Joe Latynski and a sister, Mary Debski.

A Mass of Christian Burial will be held at St. John, the Evangelist Catholic Church in Summitville on Saturday, September 21, 2013 at 10:30 AM with Father James Lang as celebrant.

The family will be present to receive friends at the Wellsville Chapel of the Martin MacLean Altmeyer Funeral Homes Friday, September 20, 2013 from 5 – 8 PM.

SORRY TO HEAR ABOUT AUNT HELEN. WISH WE COULD HAVE BEEN THERE,BUT WE WERE NOT ABLE TO COME UP THE PLANE TICKETS. WE WILL ALL MISS HER.