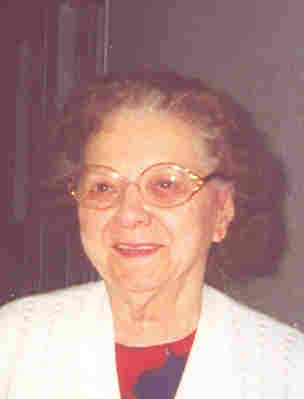 She was born February 26, 1916 in Isabella, Pennsylvania a daughter of the late Matthew J. and Clara E. Tonkovich.

Helen was a homemaker and a Catholic by faith. She was an avid Bingo player.

In addition to her parents, she was preceded in death by her husband, George J. “Jocko” Munjas, two sisters, Katherine Redosh and Mary Murray and three brothers, Andrew, Daniel and Nick Tonkovich.

She is survived by several nieces, nephews, great nieces and great nephews.

Family and friends will be received at the Bauknecht-Altmeyer Funeral Homes & Crematory 3900 Central Avenue Shadyside, Ohio on Tuesday February 5, 2008 from 11 am until time of services at 1 pm with Fr. Samuel R. Saprano officiating.

Interment in the Mt. Calvary Cemetery in Wheeling, West Virginia.

Memorial contributions may be made to the Charity of the donor’s choice.

Aunt Helen was such a loving and

caring lady. She would always make

me laugh. She is the last sibling on my father’s side. I am sure going to miss her. She will now be

Helen was a friendly, loving person, she will be missed.

We were sad to hear about Helen’s death. She was a kind and gentle lady.