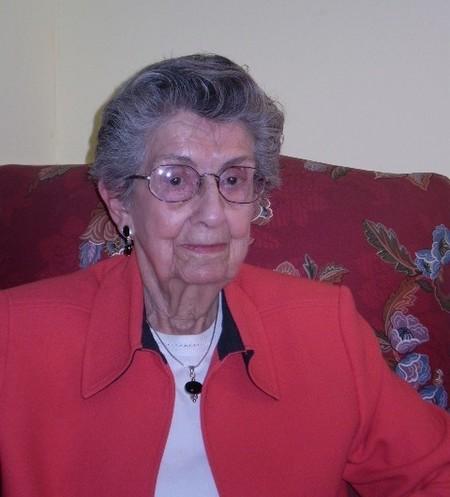 Helen Remillard, 87, passed away peacefully at her home in Virginia Beach, VA.
on Oct. 25, 2012, after a short illness.
She was born on March 11, 1925 in Manchester, NH to the late Clifford and Marie Demers.
Helen was predeceased by her husband of 60 years, Raymond A. Remillard, LCDR USN Ret. in 2006 and her sister Rita McLaughlin in 2010.
Helen was blessed with many talents. A gifted ice skater in her teens, she declined an offer to join the Ice Capades to marry and raise a family. She worked as a photo artist in the 1940s, hand tinting black and white portraits. As the devoted wife of a U.S. naval officer, Helen traveled the world and thoroughly enjoyed meeting people from other cultures. During this time she also had a long and successful Civil Service career as an Executive Administrative Assistant. After retiring, Helen and Ray settled in Virginia Beach VA, bought a motorcoach and set out to see every state. They particularly loved Alaska, the northern Rockies and New England.
Helen was a kind and generous mother and friend. She was politically astute, an avid reader, loved a good crossword puzzle, and cared deeply for her pets. She maintained her intelligence and sense of humor right to the end.
Helen is survived by her daughter Christine M. Lewis Roney of Newport News, VA; her son Raymond C. Remillard of Virginia Beach, VA; grandchildren Tiffany Kucifer Kevin and Raymond Mathieu Remillard Kellie; great grandchildren Emma Kucifer and Evan Remillard as well as a host of relatives and friends who will miss her greatly.
The family wishes to thank the staff of Sentara Hospice and Seniorcorp for their kindness, care and compassion.
A service at Church of the Ascension in Virginia Beach, VA and interment at Arlington National Cemetery will be held at a later date.
In lieu of flowers, a donation in Helen’s memory may be made to Catholic Charities of Eastern VA http://www.cceva.org/ or Sentara Hospice http://sentarahealthfoundation17278.thankyou4caring.org/page.aspx?pid=367.
Altmeyer Funeral Home-Riverside Chapel, Newport News, is in charge of arrangements.

Helen was our friend and we shall miss those times we shared together. We wish her family our most heartfelt condolences.

We shared the love of animals, of flowers and lawns, of children and grandchildren and their successes in life.

Helen loved life, her family and her neighbors and we loved her back. We grew up with Helen and Raymond as the stalwarts of our section of Startford Chase. They were there to help in any way they could and were greatly appreciated.

We will miss you Helen but know you are in a better place.

I will certainly miss Helen,she was so kind, and had a wonderful sense of humor.My sympathies to the family.

My thoughts and prayers are with your family in the loss of your Mother Helen.

Our hearts and prayers are with the family of Helen. We always enjoyed having her as our neighbor and friend over the years. She was a special lady and we loved her. God bless you at this time. Bob and Ann Smith

Please accept our heartfelt sympathy at Helen’s passing. After growing up next door to the Remillards, it was a blessing to have reconnected with Helen over the last few years. She was a one of a kind character that will always be fondly and lovingly remembered in our home. So many wonderful memories…

Thirty-seven years of love and laughter, a cat named “Fungus”

;- and camp sites and fire circles

“Best friends” is not a casual statement, we were indeed best friends from day one until now.

Helen is with Ray, knowing that Christine and Ray and all the Grandkids are happy and well.

It doesn’t get better than that. My love to each of you always,