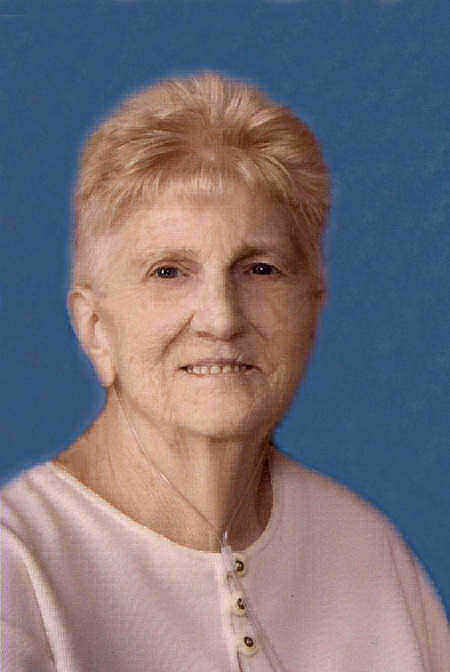 SMITH, Hazel P., 76, of Benwood WV, died Thursday, December 23, 2011 at the Ohio Valley Medical Center, Wheeling WV. She was born November 1, 1935 in Washington Lands, Moundsville WV, a daughter of the late Frank and Letha Hardman Williams. Hazel was retired from Panhandle Support as a Home Health Care specialist and also worked at the Dairy Queen, and was a member of the Benwood Firemans Auxilliary.
In addition to her parents, Hazel was preceded in death by 2 sisters: Alta Popicg and Agnes Tracey, 2 brothers: Carl and George Williams and a grandson, Patrick Samuel Smith.
Surviving is her husband Alfred Smith, 6 children; Teresa Ann Smith Rob Nasworth, of Benwood, Dennis Smith of Benwood, Paula Smith of McMechen, Mary MargaretJoeRatliffe of Harpers Ferry, WV, Patrick and Elizabeth Smith, both of Benwood, 10 grandchildren, 12 great grandchildren and a special friend and cousin, Betty Chieffalo.
Friends will be received on Tuesday, December 27, 2011 from 11:00am until time of services at 3:00pm with Tim Seidler officiating, at the Altmeyer Funeral Homes and Crematory, Benwood McMechen Chapel, 214 Marshall St., McMechen, WV
Memorial contributions may be made to the American Cancer Society.
Online condolences may be extended to the family at altmeyer.com.

Please know that you and your family are very much in our thoughts and heart at this time or sorrow. Hazel was a very kind lady and she will be missed.

I have wonderful memories of her growing up when Liz and I would be playing together on a summer day and she would call us to the back door and give us a special treat from the Dairy Queen that she had brought home from work.

We want to express our sympathy for your loss. We are sorry that we can’t be there due to Don’s illness. You are in our thoughts and prayers.

My heart and prayers our with your family,Hazel was such a wonderful person and best friend to my mom, now they will be together in Heaven!!!! I can hear the angels singing with open arms!!!

On behalf of our family, our thoughts and prayers are with you all. I remember when Hazel and my grandmother Lora worked at Dairy Queen together. My God bless and care for you in your time of loss.

So sorry for your loss. I will always remember Hazel sitting in the stands cheering on our agency’s softball team. She was a great lady.

I am deeply sadden to hear of the loss of your Mom. She was really a great lady who gave us many memories & was our #1 fan at our softball games. She will be missed and may her memories be your strength during this difficult time. My deepest sympathy are with you and your family.

TO THE SMITH FAMILY,SO SORRY TO HEAR ABOUT YOUR LOSS,TAKE CARE OF YOUR, DAD FOR HE’LL NEED YOU ALL MORE THAN EVER NOW.YOUR FRIEND TOM & VICKIE & FAMILY.GOD BLESS