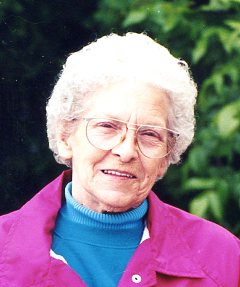 Grace McDevitt, 82 of Lisbon, OH died Wednesday, September 16, 2009 at Salem Community Hospital following a lengthy illness. She was born in Mountain Top, PA on September 26, 1926 and was the daughter of the late Eddie and Marion Wetzel Allabaugh.

Besides her parents and husband, a step-son: Scott L. McDevitt; two brothers: Jerry Wetzel and Henry Allabaugh; two sisters: Matilla “Tilly” Robinson and Elsie Hahn; one granddaughter and one great granddaughter preceded her in death.

Services will be held at the Calcutta Chapel of the Martin MacLean Altmeyer Funeral Homes on Friday, September 18, 2009 at 1:00 PM with Brother Allen Jeffries of Apostolic House of Faith officiating.

The family will be present to receive friends at the funeral home in Calcutta on Friday from 11:00 AM up until the time of service.