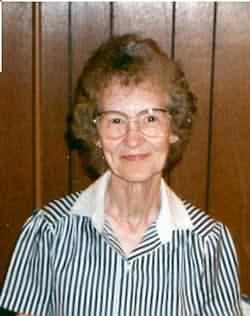 Geraldine was born December 4, 1917 in Beury, WV, daughter of the late Homer E. Lynch and Myrtle Addie Craddock Smiley. She was the owner and operator of Smiley’s Restaraunt in McMechen for 29 years, and was a member of McMechen-Benwood United Methodist Church.

In addition to her parents, she was preceeded in death by a brother, Arden Smiley; and a sister Nellie Zesiger.

Friends will be received Sunday, March 18, 2001 from 12-3 and 6-8 pm at Altmeyer Funeral Home, 214 Marshall Street, McMechen, where services will be held on Monday, March 19, 2001 at 11:00 am with the Rev. Edward Craft officiating. Interment will be at Greenlawn Memorial Park in New Martinsville, WV.

Wish i could of ben there to say good bye to grandma.She knows that she was loved very much. We will miss her. Love Julie Lynn