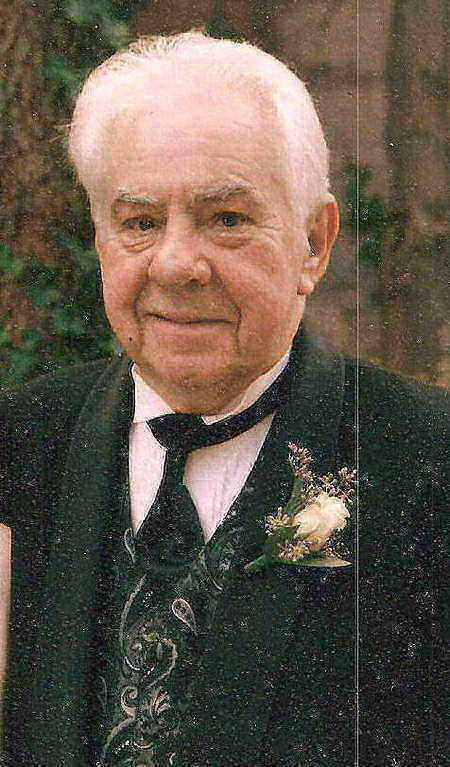 He was born in East Liverpool, OH on February 28, 1929 and was the son of the late Charles William & Ruby Marie Spencer Watkins.

Mr. Watkins retired in 1979 from the former Crucible Steel Mill in Midland, PA, where he was a millwright. He was a graduate of Wellsville High School, a veteran of the US Army and belonged to the Barbershop Chapter. He was a member of Trinity Presbyterian Church, where he had served as a deacon, trustee, elder, was past Sunday School Superintendant and sang in the church choir and their quartet.

He is survived by his wife, Betty J. Rankin Watkins whom he married September 17, 1955.

Besides his parents, two brothers, Norman P. Watkins and Dale C. Watkins preceded him in death.

Services will be held at the Calcutta Chapel of the Martin MacLean Altmeyer Funeral Homes on Friday, August 14, 2009 at 11:00 AM with Rev. Stephen Cramer of the church officiating.

Burial will follow in Columbiana County Memorial Park where the Tri State Burial Group will accord military honors.

Memorial contributions may be made to the American Lung Association of Ohio, Regional Processing Center, 6100 Rockside Woods Blvd. #260, Independence, Ohio 44131-2340

Dear Grandpa-I miss you. I love you!

So sorry to hear about your father. I always enjoyed hanging out at your house. We have some great memories! I know this is a difficult time to go through, and you are in our thoughts and prayers.

Was just catching up with my hometown news via the Evening Review online website and saw that you recently lost your dad. Although I realize how devastated you must be, please know that I’m thinking of you and praying that your broken hearts will soon heal.

In this time of sadness and sorrow take comfort in the fact that your father is in a better place; a place void of human frailties and illness.As time passes only reflect on the good and joyous times spent with the dearly departed. For on that day, when the Lord calls us home, we will rejoin the ones that we love and have gone before us.

Pat, Jeff and all of your family – please accept my deepest sympathy for the loss of your father.

I am sorry for the loss of your father. I hope you find comfort in knowing the he is in a better place where all suffering ends.

I am so sorry for your loss. It sounds like he lived a fulfilling life with many wonderful accomplishments!

I am so sorry for your loss. My thoughts and prayers are with all of you.

You are in my prayers. Treva