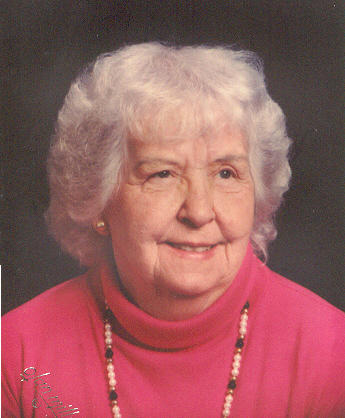 She was born on November 16, 1914, in the Dixonville area of East Liverpool, a daughter of the late Charles and Verna Johnson Baker.

Mrs. Fitch spent her lifetime in this area, working at various local potteries as a ware dresser. After 40 years of service, she retitred in 1971 from the Harker China Company. She attended the Ohio Valley Business College and belonged to the Triangle Senior Citizens, St. Stephen’s Senior Citizen Group, Daughters of the American Revolution, Elizabeth Crockett Chapter in Granbury, Texas, and was a life member of the Ladies Auxillary Veteran of Foreign Wars, Post 66.

In addition to her parents, she is preceded in death by her husband Bernard V. Fitch on February 26, 1949 whom she married October 20, 1934 in Wellsburg, West Virginia; 3 brothers; Edwin J. Baker, Raymond Baker and Donald Baker, and a sister Clara Flint.

Services will be held Wednesday, February, 25, 2004 at 10:30 A.M. at the Calcutta Chapel of the Martin MacLean Altmeyer Funeral Homes with Pastor Paul Sturm, officiating.

All my prayers to you and the family.

We are so sorry to hear of the death of your Mother. Being a Christian, I know you believe that she is in a better place, and your faith and love in the Lord will get you through this difficult time.

My Thought and prayers are with you and the family.

Cookie, I am so sorry to hear of your mother’s death. My heart goes out to you and your family. I will keep you in my prayers in your time of mourning.

Cookie, Please except condolences from my Wife Donna and my Self.

Thinking of you and your family. May your memories lighten your heart. Sincerely, Lee Wagner Eddy

I remeber one summer that Georgia &

Bernard stayed with our Family. We

had lots of fun sitting on the back

porch talking & laughing. I was

about 15 yrs old. We also watched Bernard playing ball. He was a pitcher.

I share your feelings of lost. Love from this part of your family.

My thoughts are with you in knowing that Georgia has gone on to a much better place, peacefully.

Our prayers are with you and family at this sad time. Love

Please accept my condolences in the passing of your love one

Please know that my loving thoughts go to the family of this wonderful woman. She was loved. She will be missed.

Please know that you are in our thoughts and prayers.

Sorry about your mother. I know you will miss her. I still miss my parents and they have been gone over 20 years & buried at Columbiana Co. Memorial. Love to you and your family. thelma

Was very sorry to hear about your Mom. She really didn’t change much over the years. Just seems like yesterday when you all lived on Prospect Street and we were all kids. Maybe all our Moms are in heaven together, just like the old neighborhood, and keeping an eye out for their “kids”.

My thoughts are with you.