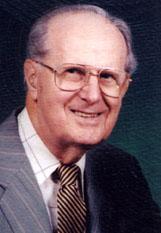 RICE, Frank Logsdon, 93 of Woodsdale, Wheeling, WV, died Saturday, June 10, 2006 at home with his loving family by his side.

He was the devoted husband of Mary Ellen Voellinger Rice, who passed away on March 9, 2005. They were married 63 years and 9 months, and were the beloved parents of Nancy Ellen O’Leary, their only child.

He was a graduate of Triadelphia High School, West Liberty State College and Elliot Business College.

Frank was a member of “the greatest generation,” one of those who served their country admirably during World War II. As a member of the United States Army’s 810th Infantry, he served in the Atlantic Theatre of Operations during the war. He was part of the invasionary forces that landed on Omaha Beach in Normandy, France on D-Day, June 6, 1944.

Throughout his entire career, Frank was a manufacturer’s sales representative. He was in the sales division as a sales manager for the Sunshine Biscuit Company for 30 years.

He then became an executive sales representative for International Paper Company. In 1988, he was recognized by the United Commercial Travelers of America for his 50 years affiliations with the organization. This year he was honored for his 68 years of membership in U.C.T.

Frank was a member of St. Michael Catholic Church, Wheeling. Upon his retirement from sales, he volunteered many hours for St. Michael’s and the Diocese of Wheeling-Charleston.

He was an avid and lifelong golfer who played until the age of 92. He achieved the elusive “hole-in-one” three times during his years on the links. A highlight of his golfing years was the round of golf he played with the legendary Sam Snead at the Greenbrier in 1994, when Snead was the pro-emeritus at the resort, and both men were 82 years of age.

He was a member of the Knights of Columbus and the Oglebay Park Golf Club.

Surviving are his daughter, Nancy Ellen Rice O’Leary and his son-in-law Jack O’Leary.

Mass of Christian Burial will be celebrated at 10:00 a.m. Tuesday, June 13, 2006 at St. Michael Catholic Church, Woodsdale with the Rev. Chris Turner, as celebrant.

Frank was a wonderful husband and father. It is now the wish of his daughter and son-in-law that he once again be united with his partner-in-life, Mary Ellen, and that God may “grant them eternal rest and let perpetual light shine upon them.”

Please accept my deepest sympathy in the death of your father. I am sure he will be united with your mother as you wish.

May God Bless You and Give you strength.

I hope you remember me, I was the Japanese Teacher that came into Steenrod to tutor nearly 20 years ago. We did the Valentine to Japan.

God Be With you and your husband.

I am so sorry. Take care of yourselves. Frances DiCesare Cerrone

To the family of Frank Rice – We knew our good friend Frank for many many years in addition to his wife Mary Ellen and his brother Jiggs and were very sorry to hear of his passing – Our sympathy and condolences goes out to all of his friends and family. Signed: Bob Hess & Patricia H. Dailer