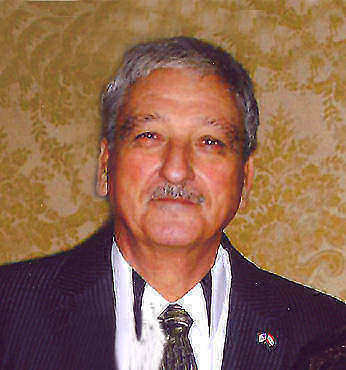 Lish, Frank, 75 of St. Clairsville, OH died Wednesday, October 10, 2012 at his residence
He was born May 10, 1937 in Wellsburg, WV, son of the late Frank and Helen Volski Lish.
Frank was a member of Our Lady of Lebanon Catholic Maronite Church and a retired employee of Wheeling Pittsburgh Steel.
In addition to his parents he was preceded in death by three brothers, Paul, Stanley and Joe Lish.
Survivors include his wife of 44 years, Mary A. R. Seabright Lish of St. Clairsville; four children, Louis Seabright of Wheeling, WV, Michael Cindy Seabright of Oil City, PA, Kim Jan Seabright of Follansbee, WV and Jody Seabright of Wheeling; five sisters, Genevieve Brady of Scranton, PA, Margaret George Kotch of Wellsburg, WV, Marie Hayes of Wellsburg, Rose Don Henry of Steubenville, OH and Joyce Bob Peterson of Weirton, WV; brother, Edward Beatrice Lish of Wellsburg; six grandchildren, Christopher Beth Seabright of Pittsburgh, PA, Jennifer Joseph Lallone of Wellsburg, Eric Jasmine Seabright of Seattle, WA, Natalie Matt Dunn of Jacksonville, NC, Michael Seabright of Oil City, PA and Abbie Seabright of Wheeling; three great-grandchildren, Anthony Lallone of Wellsburg, Allyson and Kellen Seabright both of Pittsburgh; several nieces and nephews and special friends at the Sunday Breakfast Club.
Friends will be received 2-4pm and 6-8pm Sunday, October 14, 2012 at Altmeyer Funeral Home, 1400 Eoff St., Wheeling, where a rosary service will be held Sunday at 7 pm. Mass of Christian burial will be celebrated at 11:00 am Monday, October 15, 2012 at Our Lady of Lebanon Catholic Maronite Church with Rev. Bakhos Chidiac as celebrant.
In lieu of flowers, memorial contributions can be made to Valley Hospice at 98 East Cove Avenue, Wheeling, WV 26003.
Online condolences may be expressed to the family at altmeyer.com.

Mary, Jody, and Abbie: My sincerest sympathy for the loss of your beloved Frank. He was a wonderful, kind, and caring person. May God bring your whole family comfort during this difficult time. Sincerely, Jamie Sokos and family

Our sincerest condolences go out to the Lish/Seabright family. May time ease your sorrow, and may beautiful memories bring confort to all of you at this time.

Both families have met a lot to me over the years and to our son Rob. May God be with you always.