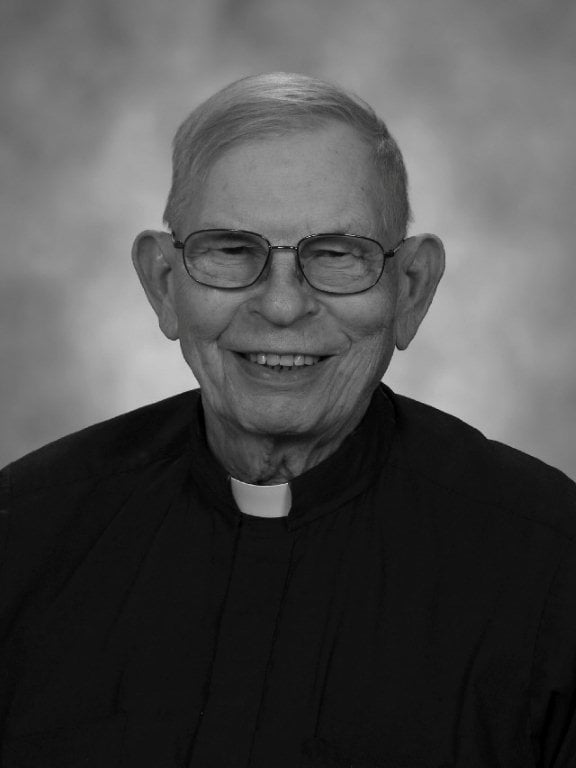 Father Jerome D. Rawa, S.M., 84 died Wednesday, October 10, 2012 at Good Shepherd Nursing Home, Wheeling. He was the son of Frank Rawa and Mary Wietecha Rawa, born in Hilltown, PA.
In addition to his parents he is predeceased by a sister, Agnes Joan and brothers, Raymond, Joseph and Thomas. He is survived by sisters, Marie Knight and Irene Hagerman, brothers, Francis Marta and John Margaret,a sister-in-law, Carol Rawa, many nieces and nephews and his brothers in the Society of Mary.
From a very early age, Father Rawa was attracted to the priesthood and devotion to the Blessed Virgin Mary. He entered the Marist minor seminary in Langhorne, PA in 1942 and made his profession of vows as a member of the Society of Mary in 1949. After completing his theology studies at Marist College, Washington, D.C., he was ordained a Catholic Priest in 1955.
During the following 24 years he distinguished himself as a classroom math teacher in minor seminaries and Marist high schools in Pennsylvania, Ohio and Louisiana. He spent 10 years as a chaplain to St. Mary’s Hospital, Langhorne, PA and for the next 22 years he was a dedicated and beloved pastor to the people of Holy Family Church, Richwood, WV.
Father Rawa moved to Wheeling after being diagnosed with cancer in January, became a resident at Good Shepherd Nursing Home and earned the love and affection of the staff, nurses and aides of a very caring place which he was glad to call ‘home” during his final illness.
Visitation will be Monday, October 15, 2012 from 4 – 6 pm in the Chapel of Good Shepherd Nursing Home, 159 Edgington Lane. Evening Prayer from the Office of the Dead will be recited at 6:00 pm.
Mass of Christian Burial will be celebrated on Tuesday, October 16, 2012 at 11:30 am in the Chapel at Good Shepherd Nursing Home. Interment will follow immediately at Calvary Cemetery in the Marist plot. More information about the Marists: www.societyofmaryusa.org.
Arrangements by the Altmeyer Funeral Home, 1400 Eoff St., Wheeling, WV 26003.
Online condolences may be extended to the family at altmeyer.com