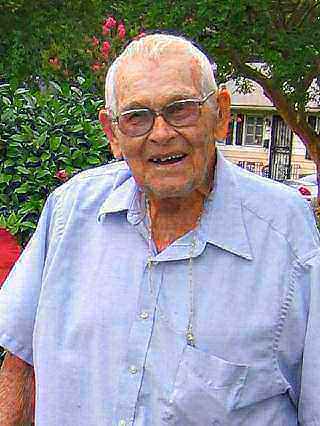 Eugene C. Adamson
Norfolk – Eugene C. Adamson of River Oaks died on August 12, 2012 peacefully in his sleep. Born a country boy March 1, 1919 in a log cabin in Lawrence County Missouri, he experienced the quintessential country childhood; chickens, cows, horses, hunting, trapping and of course those barefoot walks to school, summer and winter so he always said. In high school in the metropolis of Miller, Missouri he played football. After a family move he was in the band playing the drums for Baxter Springs High. Upon graduation he found work as a short order cook in a route 66 truck stop owned by his parents. Later he drove trucks hauling oil rigs in the Texas and Oklahoma oil fields. Joining the Navy a year prior to WWII, he was ready when the war started, serving most of the time in the Pacific Theater. After the war, the family had a tour of duty in London before returning to Norfolk, VA to retire with 20 years of service. His next career was with Murray’s Steaks. Working in sales he was often their salesman of the month. Another 20 years and he was ready to retire for good. In his retirement he enjoyed cooking, where according to him he made the best pancakes, hamburgers, steaks, etc., but he was certainly famous for his almond sugar cookies. As the “Big Apple”, he was well known to truckers far and wide as the man to go to for directions over the CB when in Hampton Roads. He routinely rose in the early a.m. to help many “lost” truckers find their destinations. The rest of his time was spent in the garden; producing bountiful crops of veggies that he loved to share with neighbors and friends and some of the most amazing tulips. As a man he was one of the “good ones”. A devoted husband of 50 years to Ellen deceased he showed his deep love by being her uncomplaining care giver in the final years of her life. He spent every day all day at her bedside in the nursing home showing the depth of their love. Kind and generous, he watched over his family with pride, always the first to help when any family member needed help. The family will miss his presence but will cherish their memories. Son Jimmie Adamson deceased and granddaughter Debra Watson and great- grandson Samuel; son Mark Adamson and granddaughter April Watts, great-granddaughter Rhiannon Watts, great great-grandson Gabriel, grandson Jesse Adamson and wife Stephanie, great-grandsons Isaiah and Jacob, grandson Colby Adamson and grandson Luke Gibson; daughter Pam Evans and husband Tom.

I am sorry to hear about the passing of your Dad. I had not stopped to talk with him in a long time, but occasionally I would see him in the yard. I’d beep the horn and he’d wave. My deepest sympathy. Diane Foshay

i am sorry to here about your father. he was a kind man and i loved him. he did so mant things in his life and he was good to me and his grandchildren.you did a wonderful job on writing his review, and i injoyed reading about his whole life. sincerely laura frank,jesse,and colby,s mother

I was saddened to read of Mr. Adamson’s death. He was a dear, dear man. He and I joined the Ballentine family the same day – he as a resident, I as the Marketing Director. After he left us, I so missed his smile, his enthusiasm, and his love of dancing. My special thoughts go to all your family for the loss of this beautiful man.