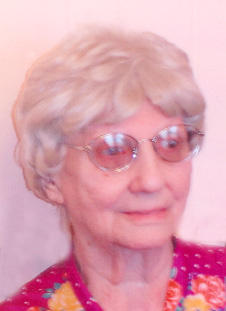 DARNLEY, Emily Ruth Frye, 95, of Elm Grove, WV, formerly of Goosetown, East Wheeling, died Friday, July 31, 2009 at home. Born in Warwood WV on August 31, 1913, Emily was the daughter of the late Harvey and Minnie Schau Frye. She was a retired employee of Wheeling Stamping Co with 43 years of service and a member of St. Vincent de Paul Catholic Church, Elm Grove. In addition to her parents, Emily was preceded in death by her husband, Robert Darnley in 1986; her infant daughter, Jacqueline; her grand daughter, Deborah Ann Norman; three brothers, Clarence, Edward J., and Wilbert H. Frye; her sister, Mamie K. Nichols and two sisters who died at a very young age, Clare Mae and Margaret Frye. Surviving are two daughters, Janet Fleming and Deanna “Joyce” Cuchta and her husband Bill all of Wheeling; one son, Robert Darnley and his wife Linda of New York; her grandchildren, Sonya Norman, Brenda Ward Bill, Bill Cuchta III Becky, Lynn McDonald Jeff, Bobby Darnley, and Lisa Strama Mike; 12 great grandchildren and 15 great great grandchildren; her special care giver, Michele Haglock of Wheeling.
Friends will be received at the Altmeyer Funeral Home, 1400 Eoff Street, Wheeling on Monday, August 3, 2009 from 2-4 and 6-8 pm. Vigil services will be held at 6:30 pm. Mass of Christian Burial will be celebrated at 10 am on Tuesday at St Vincent de Paul Catholic Church. Interment will follow at Greenwood Cemetery. The family would like to thank Tender Loving Care Hospice for the outstanding care they provided. With that thought in mind, memorial contributions may be made to TLC Hospice, 1231 Warwood Ave. Wheeling WV 26003. Online condolences may be expressed to the family at altmeyer.com.

A great lady who will be missed! She always offered help to others and loved to feed her friends and family, even if they weren’t hungry! : I always enjoyed her stories of the good ole days! A wonderful hard working woman who touched many lives. Our sympathy goes out to the rest of the family. Love, Suzzy & Dylan

i would like to express my deepest condolences in the loss of your mother, a great person. i have nothing but fond memories of her.