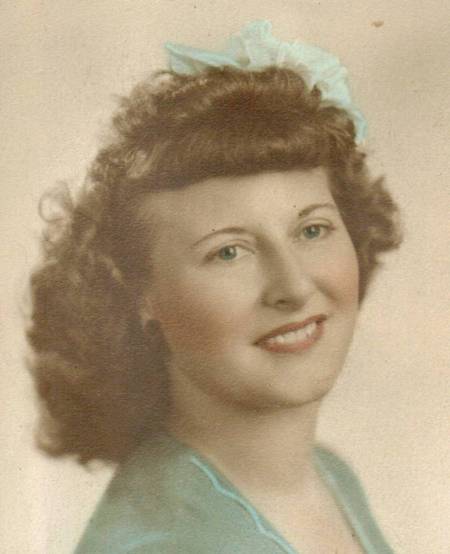 Emily Cox Gastmier went to be with her Lord Saturday, August 4, 2012. She passed away in the home she had lived in since 1964,
Emily was born in North Carolina July 30, 1918. She grew up in Landis, NC and played basketball on the high school team.
During World War II, she was a cashier at an A&P store in Portsmouth.
Emily met Creighton in Portsmouth while he was serving aboard the battleship USS Idaho. They married, and with Emily’s daughter, Nancy, they went where the Navy sent them. First to Baltimore, back to Portsmouth, where their daughter, Annette, and son, Creighton, were born. The whole family had duty in Corpus Christi, Texas, then San Diego, California. The last duty assignment was Yorktown Naval Weapons Station, where Creighton retired from The US Navy and civil service.
Emily and Creighton were some of the first residents of Shore Park in Denbigh. Emily was one of the first members of the Shore Park Garden Club. Resurrection Lutheran Church had faithful members in Emily and Creighton, Emily was a member of Ruth Circle, Alter Guild and she was Sunshine Chairman for many years. She also was a member of the church bowling team.
Emily loved to bowl and was a member of the 1966-67 Fair Lanes League Champions.
The Atlanta Braves lost a loyal fan in Emily. Everything stopped if she had a game.
Emily was preceded in death by her husband, Creighton H. Gastmier; son, Creighton D. Gastmier; parents, Anne and Price Goodman; brother, Clyde Goodman; and sisters, Marriette Taylor and Sarah Horne.
Left to cherish her memory are her daughters and primary caregivers, Nancy Baker and husband, Jack, and Annette Gastmier; grandchildren, Keith and Terry Baker, Tracey Patterson Brown, Crystal Davis and Creighton D. Gastmier Jr; and great-granchildren, James and Jesse Baker and Jake Davis.
In lieu of flowers, donations may be made to a charity of one’s choice or Resurrection Lutheran Church, 765 J. Clyde Morris Boulevard, Newport News, VA 23601-1513.
The family will receive friends at Altmeyer Funeral Home, Denbigh Chapel from 6-8 pm Wednesday, August 8. A graveside service will be held 11 am Thursday, August 9, at Hampton Memorial Gardens.

Dear Annette! This morning, Thursday, you accompanied your mom to her last resting place on earth. The ever sustaining consolation for you is that she will be with her Lord as well as yours. You have developed into a strong spiritual human being who is giving us all inspiration. As we say in the program, one day and one night at a time. I know the emptiness is overwhelming in the beginning and you owe it to yourself to replenish. You have done all you can with much love.

Have a restful night. Hope to see you back very soon. I love you very much, Anneliese