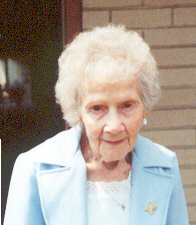 Living in this area her entire life, Mrs. Wilson worked at Hall China as a dipper for thirty-one years before her retirement in 1980. She also attended Oakland Free Methodist Church.

Besides her parents and husband, Mrs. Miller was preceded in death by three brothers, one sister, one granddaughter and one great granddaughter.

Services will be held at the Calcutta Chapel of the Martin MacLean Altmeyer Funeral Homes on Wednesday, October 6, 2004 at 1:00 PM with Pastor Mike Kramer of the church officiating.

The family requests memorial contributions be made to Oakland Free Methodist Church.