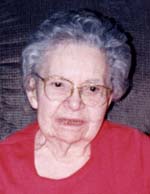 WINGERTER, Elizabeth K., 104, of Wheeling, died, Wednesday, July 22, 2009 at her home.
Elizabeth was born June 18, 1905 in Wheeling, the daughter of the late Federnane and Margaret Bayha Wingerter. She was a member of St. Michael Parish, Wheeling; a graduate of St. Joseph Academy, Wheeling; received her Bachelors degree in Education from West Liberty State College; her Masters degree in Education from the University of Pittsburgh; and her P.H.D. from Columbia University, New York.
In 1938, Elizabeth started teaching at Duquesne University as an associate professor in the School of Education. In 1947, and for the nine years to follow, she served as the Dean of Women at Duquesne. Shortly after her retirement in 1970, she returned to Wheeling.
She is survived by her three cousins, David Bayha of Wheeling, Paul Bayha of St. Clairsville, Ohio and John Wingerter of Texas; close friends, Catherine Newman and Marie Pinto, both of Wheeling; and her caring staff at Quality Sitter Service.
Friends will be received on Tuesday, July 28, 2009 from 9:30am to 10:15am at the Bishops Chapel at Mt. Calvary Cemetery, Wheeling, where funeral liturgy will be celebrated at 10:30am with the Rev. J. Daniel Pisano as celebrant. Interment will follow at the cemetery.
Arrangements by Altmeyer Funeral Home, 1400 Eoff Street, Wheeling.
Online condolences may be offered to the family at altmeyer.com

A charming and intelligent lady. It was an honor to know her and be her Podiatrist.

On behalf of the Duquesne University community, I offer my condolences to Dr. Wingerter’s family and friends. I also express our deep appreciation for her career of serving students at Duquesne, both in the classroom and as Dean of Women. Dr. Wingerter’s contribution to Duquesne is memorialized by a beautiful fountain in the front of our Student Union. Thousands pass it every day and read her name. Now she is with God and Duquesne rejoices in her eternal reward.

Shortly after Elizabeth came back to Wheeling, she contacted me and we went out several times for lunch. She gave me an invaluable piece of our family history, indicating how we were related my mother was Helen Wingerter, daughter of William and Loretta Blum Wingerter. I remember Elizabeth as charming, delightful, and lovely. I have no doubt that she is united now with God whom she loved so much. Sister Loretta Fahey.