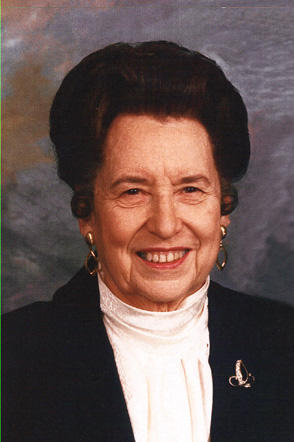 BANDI, Eleanor Lucy Rapp, 88 of Wheeling went home peacefully to be with the Lord, surrounded by her loving family, July 31, 2009.

She was born June 28, 1921 in Wheeling, WV, a daughter of the late Edward and Loretta Altmeyer Rapp.

In addition to her parents she was preceded in death by her beloved husband Harold E. Bandi in 2002, and her two dear brothers Edward Rapp and Harold Rapp.

Eleanor graduated from Saint Joseph’s Academy and worked for the Sterling Drug Company. She was a faithful and dedicated steward of Saint Vincent de Paul Parish in Wheeling for nearly 80 years. In addition, she was a member of the legion of Mary, Third Order of Mary, Christian Mothers, S.O.A.R. and AARP.

Family and friends will be received 1-4 and 7-9 p.m. Sunday at the Altmeyer Funeral Home in Elm Grove, 154 Kruger Street, Wheeling, with Rosary Devotion at 7:00 p.m.
Mass of Christian Burial will be celebrated at Saint Vincent de Paul Catholic Church in Elm Grove at 10:00 a.m. Monday, August 3, 2009, with the Rev. James McGoldrick as celebrant. Interment will follow in Mount Calvary Cemetery in Wheeling.

Memorial contributions may be made to Valley Hospice, Inc., 10686 State Route 150, Rayland, Ohio, 43943 or to Saint Vincent de Paul Parish, 2244 Marshall Ave., Wheeling, WV, 26003.
Online condolences may be expressed to the family at altmeyer.com

Aunt Eleanor made her mark in life by raising such a stellar and accomplished family. You must know she’s beaming down on all of you from Heaven. With our love and your memories, she is at peace.

Connie and Larry, were very sorry for you loosing your mother.

Be happy that she now is with your dad in a better place and both will watch over you and your families until you meet again.

My sincerest sympathy go out to all of you at this very difficult time. I have such wonderful memories of your Mom. She is at peace and reunited with loved ones. I really liked the violin at the funeral mass. Know that you are in my thoughts and prayers.

We were so sorry to hear about Mrs. Bandi. We just watched the memory video. Mrs. Bandi shared so much of your lives what a blessing. God Bless you all.

I send my condolences to Larry Bandi and family during their time of grief.

You have our deepest sympathy in the loss of your Mother. She was certainly a wonderful person. She will always live forever in all our hearts and memories. You will be in our thoughts and prayers at this time and always. Take care.

Larry, My thoughts and prayers are with you and your family at this very difficult time.

Sorry to hear of your mother’s passing, our hearts and prayers are with you. Our deepest sympathy.

I just learned this morning of your mother’s passing. My sincerest sympathies go out to you and your family. May the Lord be with you through this difficult time.

My condolences to you all at this very difficult time. What a beautiful video tribute sharing the family photos of your mom, Larry. In every photo she was smiling and happy and obviously much loved by all. My thoughts are with you, Mary Dee, the girls and your entire family. I am so sorry for your loss and hope your sadness will be short lived knowing your mom is and always will be with you. All my best,

My sincerest sympathy to Scott & his family – God Bless you all with comfort, fond memories & a sense of peace through out this difficult time, & in the months & years ahead.

Skip, sorry for your families loss. I know the trying days your family has had. Keep the faith, And thanks for the employment you got for our team. Kenny

sorry to hear about the passing of your mother.wish your family god speed

We want to extend our sincere sympathy and friendship to each and everyone of you. We’re thinking of you at this time and wishing you comfort among your family and many friends.

Eleanor was “mom” to alot of us kids as we were growing up. Her door was always open and the oven was soon to yield something yummy. Eleanor was always watching over us and never let us want for anything. She will be remembered for her quick smile and whit. She loved each of you dearly and was so proud of everything each one of you had accomplished. She is with God now and is holding Harold’s hand as they watch over all of you. Our thoughts and prayers are with you. God’s Peace and healing love keep you strong for each other.

We’re so sorry for your loss and we will miss Aunt Eleanor. May you be comforted by knowing that she is resting peacefully in heaven. Lots of love and prayers.